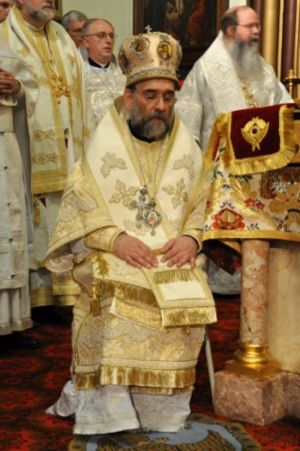 His Grace, the Right Reverend Michael (Dahulich) of New York, Ph.D., is a diocesan bishop of the Orthodox Church in America, leading the Diocese of New York and New Jersey.

Bp. Michael entered the clergy through the Carpatho-Russian Diocese, being ordained to the priesthood by Bishop John (Martin) in 1973. He served as Vice-Chancellor and as secretary to two bishops. He also was Director of Religious Education of the Johnstown deanery and taught at the Christ the Saviour Seminary.

On September 22, 2009, he was elected as the bishop of OCA's newly reconstituted Diocese of New York and New Jersey. On October 24 of that year, he was tonsured a rassophore monk by Met. Jonah at St. Tikhon's Orthodox Monastery in preparation for his consecration to the episcopacy.

On May 8, 2010, he was consecrated to the episcopacy at Ss. Peter and Paul Orthodox Church in Jersey City, New Jersey, and was enthroned the following day at the Cathedral of the Holy Virgin Protection in New York City.