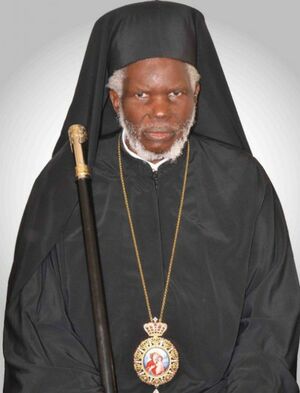 His Eminence Jonah of Kampala

His Eminence, the Most Reverend Jonah (Lwanga) (18 July 1945 – 5 September 2021) was Metropolitan of Kampala and Exarch of All Uganda, part of the Church of Alexandria. His Eminence was credited with the establishment of the Diocese of Gulu in Uganda.

The future Metropolitan was born in rural Degeya, British Protectorate of Uganda on July 18, 1945 to an Orthodox family. Father Obadiah Kabanda Basajakitalo was his grandfather, and thus His Eminence grew surrounded by the missionary efforts of the first Orthodox Ugandans. From 1952 to 1964, Jonah completed his general education in Bulemezi and Kyadondo, Uganda and then departed that year to study at the Ecclesiastical School of Crete, until 1968.

Immediately following graduation from the Ecclesiastical School he continued his studies at the University of Athens, graduating in 1973 with a degree in Philosophy. Jonah stayed at the University of Athens until 1978, this time obtaining a degree in Theology. In 1979 Jonah headed back to Uganda, serving as secretary of the Ugandan Mission under Metropolitan Frumentios (Nasios) (1972–1981) of the Metropolis of Irinoupolis until 1981.

On May 1, 1981, he was ordained to the diaconate. In October His Beatitude Anastasios (Yannoulatos), then Bishop of Androusa (1972–1991), arrived in Kenya in order to become Vicar for East Africa, following the repose of Metropolitan Frumentios. The East African Mission grew substantially during his tenure because it was one of the few occasions in Church History that a hierarch from a certain Synod (the Church of Greece) ruled another Synod's (the Patriarchate of Alexandria) jurisdiction during its vacancy.

His Beatitude ordained Deacon Jonah to the Holy Priesthood in 1982. In the same year, as Professor of Theology, he was sent to the Ecclesiastical School of Makarios III in Riruta, Nairobi, which had been inaugurated in the previous year. During this time, he was elevated to Archimandrite. Archimandrite Jonah worked together with Professor Andreas Tillyrides, now Metropolitan of Nairobi, who helped establish the seminary since 1977. One was the counterpart of the other: Professor Andreas was a Greek missionary, layman and pupil of His Eminence Kallistos (Ware) of Dioclea in Oxford University; while Professor Jonah was an Ugandan native, consecrated clergyman and studied with the great ecclesiastical teachers of Athens.

The fall of both Atheist Albania and the Socialist Bloc in 1991 marked the end of the persecution against Orthodoxy in Albania, and Bishop Anastasios was elected the first Archbishop of Tirana since 1967, leader of the Church of Albania. Succeeded him as Vicar to East Africa Metropolitan Petros of Accra (1990–1994), future Patriarch of Alexandria (1997–2004). With the help of Patriarch Parthenios III of Alexandria (1987–1996), Metropolitan Petros submitted to the Holy Synod the request to establish two titular dioceses: one in Riruta for Professor Andreas, then known as Archimandrite Makarios, and another one for the Tanzanian Mission in Bukoba for Archimandrite Jonah.

The Holy Synod agreed and, on July 26, 1992, Archimandrite Jonah was elected titular Bishop of Bukoba, while Makarios was made Bishop of Riruta on the previous day. One of His Grace's first decisions in Tanzania was joining the Syndesmos Orthodox Youth Movement together with Bishop Makarios. Bishop Jonah has always stressed the participation of children in the Church, as he was raised in the Church in his youth. Because of this, today East Africa has the largest Orthodox population of Africa.

His Eminence succeeded Metropolitan Theodoros (Nankyama) on the see of Kampala, honoring his legacy and expanding the Orthodox Faith in Uganda. During 1999, Metropolitan Jonah made a lecture tour in the United States in which he described his experiences and struggles as a missionary in Uganda. He visited over 18 parishes throughout the country, learning about the way Orthodoxy spread in the United States and applying it later in Uganda.

Under Metropolitan Jonah, over twenty medical facilities and a hospital have been established in Uganda, as well as an Orthodox Mother's Union to address issues of spiritual and social development of women and their children and to fight against poverty, hunger and illiteracy. The union administers over sixty Orthodox communities in Uganda. Schools for children have also been built, including Orthodox classes on Sundays. Its children serve in the Church with minor orders. He also established a female monastery dedicated to Saint Catherine of Alexandria in Uganda. (see map)

Metropolitan Jonah actively spoke out against corruption in his country, and used to encourage his priests to do so. He attended the Council of Crete in 2016. On October 27, 2017, the Holy Synod of Alexandria under His Beatitude Theodoros II gave Metropolitan Jonah the title of Elder. On November 26, 2018, thanks to His Eminence's efforts, the Holy Synod established the Diocese of Gulu for the Nilotic Mission.

In 2019, the Metropolis of Kampala celebrated the 100th anniversary since the discovery of Orthodoxy in Uganda in 1919. It was followed by a Greek parade. His Eminence considered himself and his flock as Greeks. He didn't see any ethnic barrier between Greek and Ugandan Orthodox, saying that both have the same culture. Metropolitan Jonah wasn't wrong; due to its location in the Nile Basin, were not for the fall of Egypt under Islam in the 7th century, the whole territory of Uganda today could be part of the Eastern Roman heritage, together with the Nilotic and Northern Bantu people. The Greek language is also taught in schools, some of which were built on land donated by Ugandan tribal leaders.

In September 2021, during a visit to Greece, His Eminence became seriously ill and was hospitalized in Athens. Metropolitan Jonah departed for eternal life on September 5, 2021 at 75 years of age, 28 of episcopacy. Metropolitan Makarios, his friend and colleague for almost four decades, took over the Ugandan Church. Together, both hierarchs were the oldest living members of the Holy Synod of Africa in terms of episcopacy.