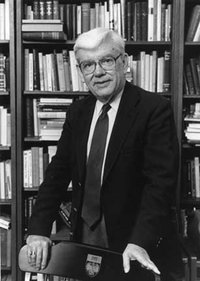 Dr. Jaroslav Pelikan
Jaroslav Jan Pelikan (December 17, 1923 – May 13, 2006) was one of the world's leading scholars in the history of Christianity and authored more than 30 books including the five-volume The Christian Tradition: A History of the Development of Doctrine (1971–1989). Pelikan gave the 1992–93 Gifford lectures at the University of Aberdeen, which yielded the book Christianity and Classical Culture. He was the Sterling Professor Emeritus of History at Yale University where he served on the faculty from 1962 to 1996, and was the president of the American Academy of Arts and Sciences from 1994 to 1997.

Born in Akron, Ohio, as the son of a Slovak Lutheran pastor and a Serbian mother, Pelikan joined the Orthodox Church in America on March 25, 1998.

In 2004, having received the John W. Kluge Prize for Lifetime Achievement in the Human Sciences, Pelikan donated his award to Saint Vladimir's Orthodox Theological Seminary, of which he was a trustee.

On May 13, 2006, Jaroslav Pelikan reposed, after a long battle with lung cancer. The funeral was May 17 in the seminary chapel of St. Vladimir's Seminary.

For those who believe that you don't need tradition because you have the Bible, the Christian Tradition has sought to say, "You are not entitled to the beliefs you cherish about such things as the Holy Trinity without a sense of what you owe to those who worked this out for you." To circumvent Saint Athanasius on the assumption that if you put me alone in a room with the New Testament, I will come up with the doctrine of the Trinity, is naive. So for these readers I have tried to provide a degree of historical sophistication, which is, I believe, compatible with an affirmation of the central doctrines of Christian faith.