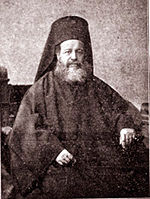 His All-Holiness Germanus V (Kavakopoulos) was Patriarch of Constantinople during the second decade of the twentieth century. He took an active role in Church reform, but was not popular because of his authoritarian style and his moderate attitude concerning the persecutions of Orthodox Christians by the Turkish government.

Patriarch Germanus was born in the Phanar district of Constantinople in 1835 and was baptized Georgios Kavakopoulos (Greek: Γεώργιος Καβακόπουλος). He obtained his education in Jerusalem and Athens, before attending the Theological School of Halki.

While Patr. Germanus was active in the church reform movement and was aggressive in defending against attempts to suppress the Orthodox Church, he was not popular with the faithful because of his authoritarian rule and his lukewarm defense of the Orthodox Christian people who were being persecuted by the Turkish Ottoman government. These protests resulted in his resignation as patriarch on October 12, 1918.

The Patriarchal see remained vacant after his resignation for three years until the election of Meletius (Metaxakis) as Meletius IV in 1921. Patr. Germanus V reposed in 1920.