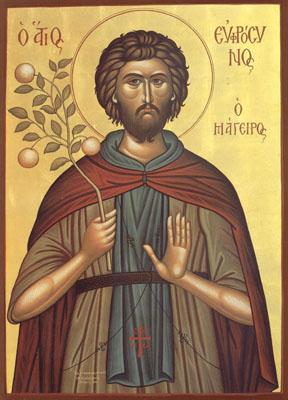 The Venerable Euphrosynus the Cook of Alexandria was a monk of the ninth century at one of the monasteries in Palestine who had been translated to Paradise while fulfilling his obedience as a cook. His feast day is September 11.

Little is known of the life of Euphrosynus other than he was born of simple parents. He was a humble monastic whose desire was for anonymity. He is known for one incident in his life.

As Euphrosynus fulfilled his monastic obedience in the kitchen as a cook for the brethren of the monastery, he did not absent himself from thought about God. He continually dwelt in prayer and fasting, remembering always that obedience is the first duty of a monk. Therefore, he was obedient to the elder brethren. His patience was amazing. The brethren often reproached him, but he did not complain and endured every unpleasantness. St. Euphrosynus pleased the Lord by his inner virtue that he concealed from people, the spiritual heights of which their unassuming fellow-monk the Lord Himself revealed to the monastic brethren.

A priest of the monastery in praying asked the Lord to show him the blessings prepared for the righteous in the age to come. In a dream it seemed to the priest that he was standing in a garden. Of the scene, he contemplated its inexplicable beauty with fear and with joy.

In it he also saw Euphrosynus, the cook of his monastery. Amazed at this encounter, the presbyter asked Euphrosynus how he came to be there. The saint replied that he was in Paradise through the great mercy of God. The priest then asked if Euphrosynus would be able to give him something from the surrounding beauty. In reply, St. Euphrosynus suggested the priest take whatever he wished, and so the priest pointed to three luscious apples growing in the garden of Paradise. Euphrosynus picked the three apples, wrapped them in a kerchief and gave them to his companion.

When the priest awoke in the early morning, he initially thought the vision a dream, but suddenly he noticed next to him the cloth with the fruit of Paradise wrapped in it, emitting a wondrous fragrance. Later, the priest found St. Euphrosynus in church and asked him under oath where he was the night before. He replied that he was where the priest also was. Then, the monk continued that the Lord, in fulfilling the prayer of the priest, had shown him Paradise and had bestowed the fruit of Paradise through him, " the lowly and unworthy servant of God, Euphrosynus."

Then, in an assembly of the monastery brethren, the priest related everything he had experienced, pointing out the spiritual heights of Euphrosynus in pleasing God and to the fragrant fruit of Paradise. Deeply impressed by what they heard, the monks went to the kitchen to pay respect to St. Euphrosynus. But, they did not find him there. Fleeing human glory, Euphrosynus had fled the monastery. The place where he concealed himself remained unknown, but the monks always remembered that their monastic brother St. Euphrosynus had come upon Paradise, and that they, in being saved through the mercy of God, would meet him there. The pieces of the apples from Paradise, the brethren reverently kept and distributed for blessing and for healing.