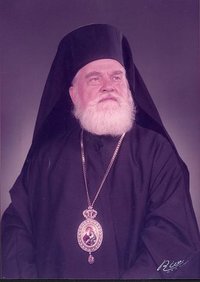 His Eminence the Most Reverend Metropolitan Emilianos (Zacharopoulos) of Kos was the ruling hierarch of the Metropolis of Kos and Nisiros under the jurisdiction of the Ecumenical Patriarchate in the Dodecanese Islands.

Metr. Emilianos, né Emilianos Zacharopoulos, was born in 1915 in Halki, Turkey. In 1936, he graduated with a Master's degree in Theology at the Theological School of Halki. In 1937, he was ordained deacon for the Parish of Ss. Constantine and Helen in Constantinople. He later served as a deacon in the Patriarchate. Patriarch Athenagoras I named him Great Chancellor (vicar general) of the Ecumenical Patriarchate and ordained him to the priesthood.

IIn 1959, he was elected Metropolitan of Seleucia by the Holy Synod of the Ecumenical Patriarchate of Constantinople and consecrated on June 12, 1959. Some years later, he became a member of the Holy Synod of the Patriarchate, until April 21, 1964, when he was exiled from Turkey. When the Patriarchate created the Archdiocese of Belgium and Exarchate of the Netherlands and Luxemburg in 1969, he was elected its first metropolitan. He was enthroned on November 11, 1969 at the Cathedral of Ss. Archangels in Brussels.

In December 1982, he was transferred by the Holy Synod to the Metropolis of Kos. In 2009, Metr. Emilianos resigned as Metropolitan of Kos and Nisyros and retired to Athens. He reposed on September 8, 2011. His funeral was held at the Church of St. Barbara in Palaio Faliron in Athens on September 10.