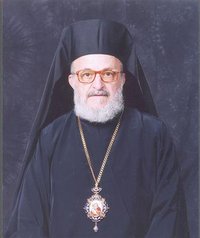 His Eminence the Most Reverend Metropolitan Panteleimon (Kontogiannis) of Belgium is the diocesan bishop (1982-present) of the Ecumenical Patriarchate's Archdiocese of Belgium.

Metr. Panteleimon, né Nikolaos Kontogiannis, was born on February 7, 1935, in Chios, Greece. In 1957, he successfully graduated with a Master's degree in Theology from the Theological Institute of Halki in Turkey. On November 28, 1954, he was ordained deacon by Metropolitan Iakovos of Ikonium, who also gave him the name of Panteleimon. The same metropolitan ordained him as priest on October 18, 1957.

Since 1957, he has served in Belgium and has created different parishes. He was promoted as archimandrite and then Episcopal Vicar of the Archdiocese of France for Belgium and Luxembourg. When the Ecumenical Patriarchate created the Archdiocese of Belgium and Exarchate of the Netherlands and Luxembourg, he was named as its first chancellor. In 1974, he was unanimously elected by the Holy Synod of the Ecumenical Patriarchate of Constantinople as auxiliary bishop of the Metropolitan of Belgium with the title of Bishop of Apollonia. In December of 1982, he was unanimously elected by the Holy Synod as Metropolitan of Belgium.

Metropolitan Panteleimon retired in 2013 and was succeeded by an auxilliary bishop of the Metropolis, Athenagoras (Peckstadt)[1]