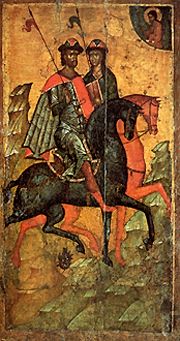 The holy, glorious and right-victorious Martyrs Boris and Gleb were the sons of the great Prince Vladimir, the baptizer of the Russian people. They became known as Passion-bearers, since they did not resist evil with violence. Boris and his brother Gleb are commemorated together on July 24 by the Church. They received the crown of martyrdom in 1015.

Boris (in baptism David) and Gleb (in baptism Roman) were brothers by the same mother. Their father Vladimir, before his baptism, had numerous wives and many children by them. Hence, Vladimir divided up the state among all of his sons before his death, and after his death the eldest son, Sviatopolk, became Prince of Kiev (the main city of the state, Kievan Rus'). Sviatopolk was jealous and wanted yet more power, and he planned to kill his brothers in order to gain their territories.

Some of Vladimir's advisers told Boris that he should take the army and establish himself as ruler of Kiev. St Boris, however, said that he could never lift his hand against his own brother.

Sviatopolk sent assassins to the Alta to kill Boris, who already knew that his brother wanted him dead. When they arrived they heard him chanting psalms and praying before an icon of Christ. He asked the Lord to strengthen him for the suffering he was about to endure. He also prayed for Sviatopolk, asking God not to count this against him as sin.

Then he lay down upon his couch, and the assassins stabbed him with their lances.

St Gleb wept for his father and brother, and was lamenting them when the assassins arrived. They seized his boat and drew their weapons, but it was Gleb's cook who stabbed him with a knife.

The martyr's body was thrown onto the shore between two trees. Later, he was buried beside St Boris in the church of St Basil. He is also commemorated on September 5.

The holy Passion-bearers Boris and Gleb were the first Russian saints glorified by the Russian and Byzantine Churches. A service to them was composed soon after their death, and its author was St John I, Metropolitan of Kiev (1008-1035), which a menaion of the twelfth century corroborates. The innumerable copies of their Life, the accounts of the relics, the miracles and eulogies in the manuscripts and printed books of the twelfth-fourteenth centuries bear witness to the special veneration of the holy Martyrs Boris and Gleb in Russia.

Transfer of the Relics

The Transfer of the Relics of the Holy Passion-Bearers Boris and Gleb is commemorated on May 2.

Righteous passion-bearers and true fulfillers of the Gospel of Christ,
Chaste Boris and guileless Gleb,
You did not resist the attacks of your brother, the enemy,
When he killed your bodies but could not touch your souls.
Therefore, let the evil lover of power mourn
While you rejoice with the angels standing before the Holy Trinity.
Pray that those who honor your memory may be pleasing to God,
And that all Orthodox Christians may be saved.

Today your most glorious memory shines forth,
Noble participants in the passion of Christ, holy Boris and Gleb,
For you call us together to sing praises to Christ our God!
Praying to Him before your sacred images,
We receive the gift of healing by your prayers,
For you are indeed divine healers.