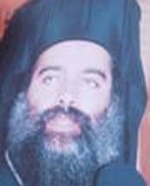 His Eminence the Most Reverend Archbishop Theodosios (Hanna) of Sebastia, usually represented in Western news sources as Attallah Hanna, is the bishop of Sebastia of the Church of Jerusalem and member of the Brotherhood of the Holy Sepulchre. He has acted as the spokesman of the patriarchate and has been put forward by Arabic laymen as a potential candidate for the position of Patriarch of Jerusalem.

Nizar Hanna was born in 1965 in the village of Rame of West Galilee. After completing his early education locally including at Patriarchate Seminary in Jerusalem, Nizar completed his studies at the Theological School in Thessaloniki in 1990 where he received Master of Arts and Doctor of Philosophy degrees. Returning to Palestine, Nizar was appointed by the Patriarchate of Jerusalem as secretary and teacher at the High Secretariat of the school at Remli (Ramlah).

In 1991, Nizar was tonsured a monk with the name Theodosios as well as receiving ordination as a deacon. He also was elected a member of the Brotherhood of the Holy Sepulchre. In 1992, Dn. Theodosios was ordained a priest at the Church of the Holy Sepulchre, and then a few days later he was elevated to the rank of archimandrite and placed in charge of the Arab section of the Patriarchate.

Later in 1992 Archim. Theodosios was appointed to a number of positions including Vice-Director and teacher of the Patriarchal School of St. Demetrios, Secretary of the Arabic Department of the Patriarchal offices, and the Pedagogic Professor at the University of Haifa. In 1996, Fr. Theodosios became involved in various duties related to publishing religious books for the community schools in Israel and the Palestinian Autonomy. He also was charged with administering the Orthodox Religious Program and the Palestine Radio Service.

He was active in the local and international ecumenical movement, including Muslim-Christian dialogues and representing the patriarchate in various international meetings. He was also a member of the board of trustees of Bethlehem's Al-Liqa' center for cultural and religious studies in the Holy Land. He was a member of the Palestinian political committee in Jerusalem, as well as served on the Board of Trustees of Jerusalem Society.

On November 18, 2005, Fr. Theodosios was elected archbishop of Sebastia and was consecrated at the Church of the Resurrection in Jerusalem on December 11 of the same year.

In May 2007, Abp. Theodosios was suspended for a duration of two months by the Holy Synod of the Church of Jerusalem presided over by Patriarch Theophilus III.[[1]],[[2]]