The Holy Family in Egypt 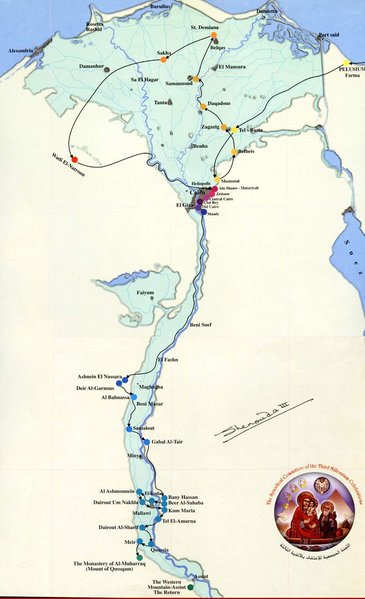 The Flight into Egypt of the Holy Family is commemorated by the Orthodox Church on December 26.[1]

"Take the young child and his mother, and flee into Egypt, and be thou there until I bring thee word" (Matthew 2:13 - KJV)

"The burden of Egypt. Behold, the LORD rideth upon a swift cloud, and shall come into Egypt: and the idols of Egypt shall be moved at his presence, and the heart of Egypt shall melt in the midst of it." (Isaiah 19:1 - KJV)

"In that day shall there be an altar to the LORD in the midst of the land of Egypt, and a pillar at the border thereof to the LORD." (Isaiah 19:19 - KJV)

According to the Scripture, Jesus Christ lived in Palestine, and the only other country he travelled to (as a young child) was Egypt. The Holy Family, throughout their stay in Egypt, which lasted for about three-and-half years, moved through many towns in Upper and Lower Egypt.

Many of the details of the journey of the Holy Family in Egypt are chronicled in a Mimar (manuscript) by Pope Theophilus, 23rd Patriarch of Alexandria (384-412 A.D.), who received these details during an apparition of the Holy Virgin Mary. Other sources of information include accounts by 2nd and 3rd century Greek and Jewish writers/philosophers/historians.

Many churches and monasteries were built in the locations which have been blessed by the visit of our Lord Jesus Christ, the Holy Virgin Mary, and St. Joseph the carpenter. Many miracles took place in these locations during the Holy Family visit 2000 years ago (and continue to occur to this day). These Coptic churches are considered the oldest and among the holiest of all churches in Christendom.

Among the places visited by the Holy Family are Zeitun in Cairo, where the Holy Virgin Mary also appeared in 1968, and Assiut in Upper Egypt, where She again appeared in 2000 [1].

In one small street in el-Matarya district of today's Cairo (Eid Street/Shek El-Te'eban Street), all kinds of bread and bakery cannot be leavened up to this day, since the Virgin Mary first visited that place with the Holy Family 2000 years ago and they were refused bread and cast away. This is an ongoing miracle that anyone can witness till this very day. Bread leavens normally in all surrounding streets.

The following Web sites and resources will help the interested reader explore the journey of the Holy Family in Egypt: