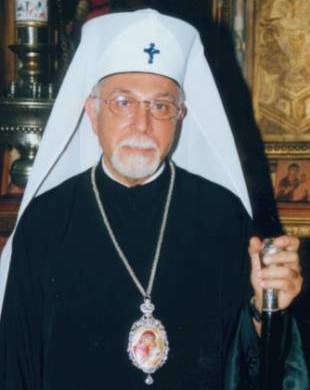 The future metropolitan was born Christakis Charalambides on April 29, 1940 in Bukavu, a city in the eastern part of today's Democratic Republic of the Congo. His parents were of Cypriot ancestry. In 1959, after completing his basic education, he entered the Catholic University of Louvain in Belgium and began studies for a medical degree. A year later, in 1960, Christakis transferred to the St. Sergius Orthodox Theological Institute in Paris, France and began divinity studies concurrently with studies at the University of Paris. He received a Master of Theology from St. Sergius Institute and a degree of lector from the Paris University.

On January 6, 1963, Christakis was ordained a deacon after joining the Greek Orthodox Metropolis of France and given the name Stephanos. On November 17, 1968, Dn. Stephanos was ordained to the priesthood. In 1972, Fr. Stephanos was appointed protosyngellios (episcopal vicar) and assigned to the city of Nice covering the southern area of France. On March 25, 1987, Fr. Stephanos was consecrated to the episcopacy with the titular title of Bishop of Nazianus. With his elevation to the episcopacy, Bishop Stephanos added the responsibilities of secretary of the Assembly of Orthodox Bishops of France to his duties, as well as being lector at St. Sergius Institute and professor of patrology at the Roman Catholic seminary in Nice.