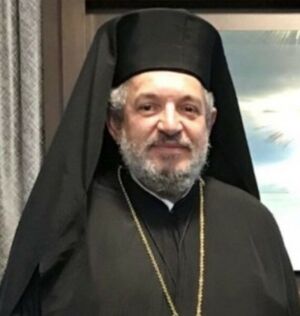 His Eminence Seraphim of Zimbabwe

George Philip Iakovou was born on February 2, 1961 in Galataria, Paphos. George knew that he wanted to serve God at an early age so, at the age of twelve years, he was accepted as a novice, with the name Seraphim, at the Monastery of Kykkos on the island of Cyprus (hence the surname Kykkotis). Besides from working with agriculture at the monastery, the young Seraphim was a very good student, first attending the Pan-Cypriot High School and then the Lyceum of Kykkos from which he graduated with honors in 1982.

On September 8, 1983, Seraphim was ordained a hierodeacon by Archbishop Chrysostomos of Nea Justiniana (1977–2006). He was then transferred from the Church of Cyprus to the Church of Greece under Archbishop Seraphim of Athens (1974–2004) in order to continue his education at the Theological School of the University of Athens, from which he graduated in 1987. During the period he attended the theological faculty, Hierodeacon Seraphim also served in Athens. Upon return to Kykkos in Cyprus, he was chosen treasurer of the monastery.

From 1988 to 1991, Hierodeacon Seraphim continued his education in Great Britain, studying English and Patristics at the Universities of Oxford and Durham under His Eminence Kallistos (Ware), then Bishop of Dioclea (1982–2007), Professor of Orthodox Theology at Oxford. He continued his studies in Patristics at Holy Cross Seminary in Massachusetts, graduating with a Master’s degree in Patristics.

While pursuing his education Hierodeacon Seraphim was ordained to the Holy Priesthood on August 15, 1991, and was raised to the dignity of Archimandrite on the same day. In 1993, Archimandrite Seraphim became a member of the Department of Post-Graduate Studies at the University of Athens, specializing in Theology. During this period he served as priest in the Archdiocese of Thyateira, and then in the Archdiocese of Athens.

Following the steps of other pupils of Bishop Kallistos such as Archimandrite Makarios Tillyrides, current Archbishop of Nairobi, Archimandrite Seraphim decided to join the East African Mission. He was received by Archbishop Petros I (Papapetrou) of Accra (1990–1994), later Patriarch of Alexandria (1997–2004), who served from 1991 to 1994 as Vicar of East Africa for the vacant Archdiocese of Irinoupolis.

In 1994, the Holy Synod under Patriarch Parthenios III (1987–1996) changed the name of the Archdiocese of Irinoupolis to Archdiocese of Kenya and elected Archbishop Irenaeus (Talambekos) of Carthage (1990–1994) as Archbishop of Kenya (1994–1997). He was the first archbishop since the vacancy during 1981 to 1994. Archbishop Petros, no longer vicar, also had his title and see renamed to Archdiocese of Cameroon.

In 1997, Archbishop Petros was elected Patriarch of Alexandria following the repose of Patriarch Parthenios. Under his recommendation, the Holy Synod elevated Bishop Jonah to the Archdiocese of Kampala, having jurisdiction over Uganda. Patriarch Petros also asked Bishop Makarios to leave the Ecclesiastical School of Makarios III in Riruta, which he helped found, and head to Alexandria, where he was made Director of the Patriarchal Library. Archimandrite Seraphim was then chosen as Director of the seminary in Riruta.

Five days later, on September 28, 1997, also under Archbishop Petros' recommendation, the Holy Synod elected Archimandrite Seraphim as Archbishop of Kenya, with jurisdiction also over Tanzania. He was enthroned on November 16, 1997. His suffragan Diocese of Bukoba in Tanzania, in which Jonah served as bishop before his promotion, also received a new hierarch, Bishop Porphyrios (Skikos) (1997–1999). In the following year, Bishop Makarios was elected Archbishop of Zimbabwe and Exarch of Southern Africa.

In 2005, with the help of the new Patriarch, His Beatitude Theodoros II, His Eminence inaugurated the male Monastery of Saint Nectarios, the first monastery of South Africa. Archbishop Seraphim wanted to provide a monastic institution in his see that would provide the Orthodox community with a spiritual sanctuary for monks and clergy in South Africa.

In October 2010, a rearrangement of diocesan responsibilities was made within the Patriarchate of Alexandria to accommodate additional duties for Archbishop Seraphim as a patriarchal representative. As part of the rearrangement, on October 10 His Eminence was transferred to the smaller Archdiocese of Zimbabwe, while Archbishop George was transferred to the Archdiocese of Accra, replacing Archbishop Damaskinos (Papandreou) who succeeded Seraphim as Archbishop of Johannesburg.

In his new position, His Eminence became the representative of the Patriarchate of Alexandria in major religious events and conferences, including the European Union and the United Nations. Archbishop Seraphim also attended the Council of Crete in 2016. In 2018, His Eminence visited the United States and met with Metropolitan Tikhon (Mollard) of Washington. They discussed the relations between the Church of America and the Patriarchate of Alexandria, noting the initiatives of aid to the African Church, such as in Kenya where Bishop David (Mahaffey) of Sitka (2014–2020) assisted the construction of a church in Eldoret and at the Ecclesiastical School of Riruta where Saint Vladimir's Theological Seminary donated many books.

Despite the recognition by the Alexandrian Church of the alternative synod placed by the Patriarchate of Constantinople in Ukraine, His Eminence criticizes the way His Holiness Bartholomew of Constantinople granted autocephaly to it without dialogue and considers His Eminence Onufriy (Berezovski) of Kiev as the rightful hierarch of Ukraine.

Archbishop Seraphim considers himself an ecologist. He stresses that everything one has received from God must be given back, without corruption. For him, hunger and poverty in Africa are a result of our sins and selfishness.

“Because Jesus Christ and the Holy Spirit are everywhere present and fill all things, this gives us a holy vision in which we recognize that the life of God exists in all things, everywhere in the world. We must have respect for all things in the creation and treat every living thing, every person, every animal, every bird, every tree and every leaf with love, care and respect. As Orthodox Christians we inspire others by living our Christian faith. This is also our most powerful way of teaching. The scriptures tell us many things about the right operation of the earth. As Orthodox Christians we must strive to fulfill all of the Biblical teachings. Today we realize that the best ecologists are the saints. They often tame wild animals, bring healing to people and the earth, and teach a gentle, kind and loving way toward all things.”

His Eminence observes his name day on January 2 in memory of Saint Seraphim of Sarov.