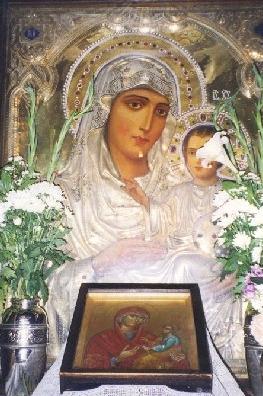 Panagia Ierosolymitissa (Gr. Ιεροσολυμίτισσα - Most Holy Lady of Jerusalem) is a very popular icon of the Theotokos because it overlooks the empty tomb of the Most Holy Theotokos at the Sepulcher of the Mother of God in Gethsemane—blessing the numerous pilgrims visiting the Holy Land of Jerusalem. The underground tomb of the Virgin Mary is situated in the Kidron Valley, on the foothills of the Mount of Olives, where the Saviour often prayed with His disciples. It is attributed to the Theotokos since it is believed that the Apostles gathered at this location and buried the most-pure body of the Mother of God. Her icon remains there as an endless spring of blessings for all the Christians, celebrated (or venerated) by the name "Panagia Ierosolimitissa."citation needed

Since 1757 AD, the entire site belongs to the Greek Orthodox Church of Jerusalem. It is shared with the Armenian Apostolic Church and various other Churches have minor rights attributed to this site, such as the Coptic Church, the Syriac Church and others.

The authenticity of this site is challenged by sources outside of the Church.

History of the Icon

According to Holy Tradition this miraculous icon was painted through the revelation of the Holy Theotokos to a nun named Tatiana from the Holy Monastery of St. Mary Magdalene, around 1870 AD. The story narrated is as follows:[1]

In 1870, there lived a monastic iconographer called Tatiana. One night, a lady appeared to her in a vision saying, "Sister Tatiana, I have come so that you can paint me." Tatiana replied, "Let it be, Blessed Sister; however, I am an iconographer and not a painter." The lady replied, "... well then, you should paint me using your iconographic style."

Sister Tatiana was furious with the boldness of this lady's response and said, "I do not have any plank of wood to use." The lady then gave her the plank of wood the sister would need and told her to "paint."

In obedience to her guest, the sister started her iconography. Sister Tatiana glanced at her guest, and she noticed the guest's appearance transfigure in front of her. The lady's mantle started to turn into gold and her face was glowing intensely. This change in the appearance of the lady worried Tatiana but the lady spoke to her, saying: "O Blessed Tatiana, you are the only person, after the Apostles and the Evangelist Luke, to have this opportunity to write an icon of me again." Sister Tatiana then realised that she was in the presence of our Holy Mother the Theotokos. In shock she awoke from her vision.

She immediately went and informed her Mother Superior of the vision in detail. The abbess did not believe in the story but told her to go to sleep and the following day she could paint an icon of the Panagia with her blessing.

Tatiana returned to her cell and before entering she noticed a bright light shining through the door. She hastened to the abbess, once again, to bring her to her cell to witness this light and understand that she was not lying about the visions. Together they returned to Tatiana's cell. Inside, they could smell a beautiful and heavenly fragrance and the light was so bright that only then did they realise that the aroma and the light were coming from an icon of the Virgin Mary.

The mysterious and miraculous appearance of the icon had the sisters in shock but our Holy Mother the Theotokos appeared once more to Tatiana and said, "Now take me from here down to my home in Gethsemane of Jerusalem." This is what the abbess and the sister did.

In iconography, this is termed "acheiropoieto" (Gr. an image not painted by hands) and is now located exactly where the Panagia wanted it to be, in her "home," her final resting place at her holy tomb in Gethsemane. The name "Ierosolymitissa" has since been adopted since it means the Most Holy Lady from Jerusalem and is extremely miraculous.

In January of 2000, the icon was flown from Gethsemane to the Metropolitan area of Kitiou to celebrate 2000 years since the birth of Christ. This formal procession occurred in the afternoon at the Metropolitan church of the Sotiros.

Pascha of the Theotokos

In honor of the "Pascha of the Theotokos" (another name for the Dormition), an ancient tradition has taken hold in Jerusalem, repeating the procession of the cross with the shroud of the Theotokos, which bears a two-sided icon with a silver oklad (covering frame). This shroud is kept throughout the year in Gethsemane directly across from the Church of the Resurrection of Christ. And only during the Dormition period does this miracle-working shroud pass into a special canopy at the Sepulcher of the Mother of God. Believers venerate it as they pass through the canopy on their knees.[2]