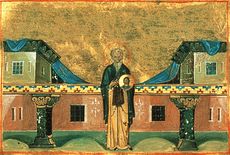 Nicetas the Confessor - miniature from the Menologion of Basil II

Our venerable father Nicetas the Confessor was a monk during the 9th century who was a defender of the veneration of icons. He became abbot of the Mydicia monastery and was imprisoned for his opposition to iconoclasm.

The iconoclast heresy was gaining power when Nicetas became head of the monastery, and its oppressive practices were only increasing. Nicetas was granted the gift of wonderworking at this time. After Emperor Leo the Armenian (r. 813-820) tried to convert monastery leaders to heresy, Nicetas stood strong in opposition. As a result, the igumen was imprisoned. He was then tricked into a false communion by the iconoclasts, in which afterward he repented the deed and only stood stronger against the heretics. He was imprisoned for another six years for defended the veneration of icons.

In 824, St. Nicetas reposed in the Lord. He was buried at the monastery and his relics became a source of healing.

You were a firm pillar and an undaunted guardian of sacred tradition, O Nicetas;
You were adorned with holy dispassion and became an illustrious confessor of the Faith.
Accept the prayers of those who cry to you,
Interceding for them with Christ our God.

You acquired a heavenly mind and life,
Shining as brightly as the sun in the splendor of your deeds!
Father Nicetas, you enlighten those in the darkness of life guiding them all to God.
Pray without ceasing for us all!