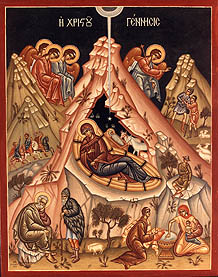 The traditional icon style of the Nativity of Our Lord and Savior Jesus Christ is from the 15th century and attributed to Saint Andrei Rublev.citation needed It depicts the Creator of the universe entering history as a newborn babe. The icon of the Nativity also shows the effect of this event on the natural life of the world.