Saint Methodius spread the Word of Christ to Slavic peoples during the 9th century. 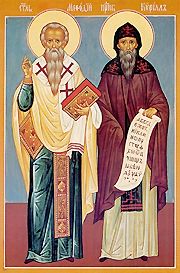 Saint Methodius, Equal-to-the-Apostles and Enlightener of the Slavic people, was born in 826 in Thessalonica. The saint and his brother, Cyril of Thessalonica, were born into a noble Greek family but decided to renounce their worldly honors to become priests.

While living the monastic life on the Bosphorous, the Slavic Khazar peoples asked that Saints Cyril and Methodius come and teach them the ways of Christ. After accepting their request the two brothers converted many while learning the native language of the people. This knowledge of the Slavic language allowed the two brothers to communicate with another Slavic group, the Moravians. These people had previously been taught Christianity by German missionaries but were unable to understand the mysteries of Christ due to a language barrier. In order for the Moravians to understand Christ's message, they needed people who were able to teach and conduct Divine Liturgy in their language. Before visiting the Moravians, Cyril and Methodius invented a new alphabet and translated the Bible into this new Slavonic language.

Upon visiting the Moravians in 863, the Germans mistrusted them due to their Eastern Orthodoxy and their knowledge of the Slavic language. Due to this distrust, the two brothers were sent to Rome, expecting condemnation. Pope Adrian II, instead, applauded their work, sanctioned the Slavonic Liturgy, and ordained Methodius and Cyril bishops. Before the two brothers could return to the Moravians and other Slavic peoples though, Cyril died in Rome on February 4, 869.

Pope Adrian II later created the Archdiocese of Moravia and Pannonia at the request of Moravian and other Slavic princes. Methodius was named archbishop of the new diocese, which was independent from the German Church.

German bishops condemned Saint Methodius to prison in 870. After three years, Pope John VIII liberated him and reinstated Methodius as Archbishop of Moravia. Before he could continue his ambitions and teach the Word of God to Bohemians and Poles, a German priest summoned him back to Rome due to his East Orthodox faith and use of only the Slavic language during liturgy. Methodius received papal support and was not subject to any punishment.

The saint then left for Constantinople and translated all of the Holy Scriptures, except for the Books of Maccabees. Methodius also translated the Nomocanon, or Greek ecclesiastico-civil law. Methodius had to continue struggling against the German clergy until his death on April 6, 885.