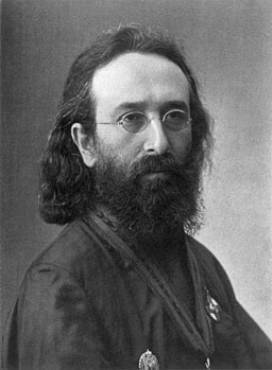 Protopresbyter Georgy Ivanovich Shavelsky (Russian: Георгий Иванович Шавельский) was a military chaplain in the Imperial Russian Armed Forces during the reign of Emperor Nicholas II. He was active as a chaplain in the war front during the Russo-Japanese War of 1904-1905 and took part in the reorganization of the chaplain services of the imperial military and naval departments. He was appointed Chaplain-General of the Forces, that is Protopresbyter of the Russian Army and Navy, as well as a member of the Holy Synod. He was nominated as one of the twenty five candidates for the office of Patriarch during the local council of 1917-1918.

Georgy Ivanovich Shavelsky was born on January 6, 1871. He began his service as a military chaplain in 1902 after having graduated from the St. Petersburg Theological Academy. On January 24, 1904, Fr. Georgy volunteered as a regimental chaplain of the 33rd East Siberian Rifle Regiment of the First Manchurian Army. He participated in twelve battles with the regiment during the Russo-Japanese War of 1904-1905, sharing with the soldiers the hardships of the war. He dressed and gave comfort to the wounded, whether they were his brothers or the enemy. He heard confessions and administered the sacraments. He himself suffered wounds in the Battle of Liaoyang. For his services in combat he was awarded both the first and second class Orders of St. Anne, the fourth class Order of St. Vladimir with swords, and a golden pectoral cross on the ribbon of St. George. Fr. Georgy was also elevated to archpriest and became the divisional dean. On December 1, 1904, he was appointed chief field chaplain of the First Manchurian Army, a post in which he served until March 1906.

Leaving the military in 1906, Fr. Georgy returned to his parish, Suvorov Church. In addition to serving the parish, he taught religion at the Smolny Institute, and in 1910, he began teaching as professor of theology at the Historico-Philological Institute in St. Petersburg. Fr. Georgy was named to the St. Petersburg diocesan mission council and to the commission reviewing the Statue Governing the Administration of the Churches and Clergy of the Military and Naval Departments. He was also named a supernumerary member of the Religious Board under the Protopresbyter.

In 1911, Fr. Georgy was named Chaplain-General of the Forces, that is the Protopresbyter of the military chaplaincy. His appointment was without precedent. He had no patrons in high circles. He was an "outsider" in the top levels of power. He was not even a mitered priest at the time of his appointment, but received his miter on the day the tsar appointed him Protopresbyter. He was the only holder of this office who had had a record of service in combat conditions. During the period he served as Protopresbyter, Fr. Georgy took great efforts to reorganize the administration of the military and naval clergy as well as the activities of military chaplains including those activities during wartime.

Fr. Georgy had also been appointed a member of the Holy Synod and was among those who were removed as members by Vladimir Lvov of the new government after the abdication the Emperor Nicholas II in March 1917.

After the Bolshevik revolution of 1917, the mitered protopresbyter Georgy Shavelsky was forced to leave Russia and entered into exile. He reposed on October 2, 1951 in Sofia, Bulgaria at the age of 80.