Icon of Ss. Geneviève and Simeon the Stylite at her tomb in Paris
Our venerable mother Geneviève of Paris was a nun originally from Nanterre who lived in France circa 500 A.D. She is considered the patron saint of the city of Paris, together with St. Denis. Her feast day is celebrated on January 3. 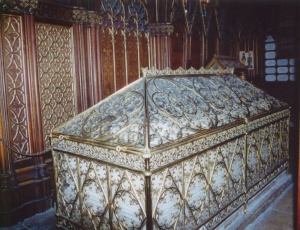 A picture of her tomb, across from the Pantheon in Paris. Most of her relics were dumped into the Seine by the radical atheists of the French Revolution, but others were collected from churches around France to which they had already been distributed.
Bishop St. Germain (July 31), on his way to England to combat the heresy which claimed that one can be saved without baptism, passed by Nanterre. He laid his hands on eight-year-old Geneviève, and asked her if she wanted to give herself to the Lord; she said yes. Geneviève was angry with her mother, when her mother opposed the vocation. Her mother then went blind, but was healed when Geneviève forgave her.

St. Geneviève is associated with many miraculous events. When Attila the Hun approached, she upbraided the cowardly men who wanted to leave town: they remained in Paris, and Attila's barbarians turned away. St. Symeon the Stylite sent her a letter after seeing her in a vision. St. Geneviève also worked exorcisms using holy oil blessed by the bishop.

When old, she ate only bread with milk, and only on Sundays and Thursdays. The milk was added by insistence of the bishops. 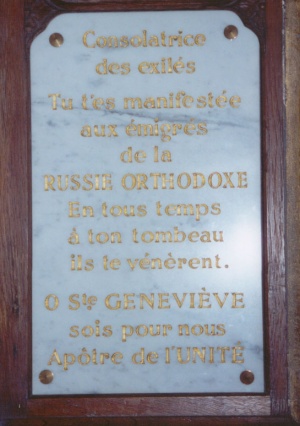 Inscription at the tomb of St. Geneviève in Paris: "Consolation of exiles, you have manifested yourself to the Russian Orthodox émigrés. In all times, at your tomb, they venerate you. O Holy Geneviève, pray for us, Apostle of Unity."