Early life in the Middle East

St. Eustathius was born Sleeba ('Stavros') Abakker to Salbi and Nabuna Abakker in the village of Kfarzo (in modern day Turkey) onJanuary 1, 1854. When he was still a young child he lost his father and most of his brothers and sisters to an epidemic then sweeping through Mesopotamia. St. Eustathius' mother and one of his sisters were the only other survivors in his immediate family.

At 7-years old St. Eustathius began studies under his uncle, the Priest Danaha. He later continued his education under Raban Shem'un (Simon) in Damascus. Throughout this time St. Eustathius worked in nearby villages to support himself and his family. In 1880 he was ordained a deacon by his teacher in Damascus, who had been elected Metropolitan Mor Athanasius Shem'un and given charge of the city.

From his youth Eustathius prayed regularly, kept the fasts of the Syriac Orthodox Church, and meditated frequently. Because of his religious education he grew up immersed in the hymnography and customs of the Church of Antioch. By the time he completed his studies Eustathius had also mastered liturgical Syriac, the language of the services of the Syriac Orthodox Church.

In the late 1800s the Syriac Orthodox Church in India was just emerging from a difficult era in its life. Following an Anglican-created schism the Malankara Orthodox Church had been placed on firmer foundations by Patriarch Ignatius Peter IV of Antioch, who had assisted it in its legal battle with the schism and divided the Church into six dioceses for the better care of the Malankara Orthodox faithful.

Despite the return of normalcy to the life of the Malankara Orthodox Church it still desired more consistent help from the Patriarchate and consequently submitted a request to Patriarch Ignatius Peter IV for a patriarchal exarch to be sent to Kerala. The patriarch was initially hesitant to send an exarch for fear of compromising the authority of the six diocesan metropolitans, but finally in 1880 granted the requests of the Malankara Orthodox Church and sent Metropolitan Mor Athanasius Shem'un of Damascus to India as his representative.

At the time of his arrival in Cochin with Metropolitan Mor Athanasius in 1881 Deacon Sleeba was only 27-years old. The two immediately began preaching the Apostolic Faith in Kerala, strengthening the Orthodox in their faith and sharing the Gospel with the non-Orthodox. In 1889 the two were able to move to the 'Old Seminary' in Kottayam following its return to the Malankara Orthodox Church from the Anglican missionaries and their disciples who had taken control of it. After this Metropolitan Mor Athanasius and St. Eustathius were able to begin educating seminarians in Kottayam, training them in the customs and practices of the Church of Antioch and teaching theology.

On June 11, 1889 Metropolitan Mor Athanasius unexpectedly fell asleep in the Lord, leaving Eustathius alone in Kerala. After a time of mourning, however, Eustathius returned to preaching the Gospel throughout Kerala and became well known throughout the region for his sermons and also for his charity (he would often go without food so that he could give the money he saved to the poor). It was during this time that Eustathius also became closer to Metropolitan Geevarghese Mar Gregorios of Parumala, who was later glorified as St. Gregory of Parumala and is popularly known in Kerala as Parumala Thirumeni.

In 1895, Gregory of Parumala led a pilgrimage to the Holy Land, taking the then Deacon Sleeba with him as a guide. The two remained close until Gregory's repose on November 2, 1902, which saddened Eustathius as much as the death of Metropolitan Mor Athanasius Shem'un. Eustathius served at St. Gregory's funeral in Parumala.

Although he was only 6 years younger than Parumala Thirumeni, Eustathius remained a deacon until several years after St. Gregorious's death (Parumala Thirumeni). In 1906 Dn. Sleeba was asked to return to Dayro d'Mor Mattai near Nineveh (modern day Mosul) in Mesopotamia to be consecrated to the episcopacy. He traveled to the Middle East with Deacon Mathai of Cheettalathumkara (later Catholicos Mar Augen I). Upon arriving at Dayro d'Mor Mattai, Eustathius was ordained to the priesthood in 1906 and two weeks later elevated to the rank of raban/ramban by Metropolitan Mor Kurillos Elias of Mor Mattai.

Following his ordination Fr. Sleeba traveled to Dayro d'Mor Hananyo near Mardin (in modern day Turkey) to stay with the newly enthroned Patriarch Ignatius Abdallah II of Antioch. After his visit to Mardin, Eustathius traveled to Kfarzo to visit his sister and remained in the area for two years to preach in its churches. In early 1908 Fr. Sleeba was consecrated Metropolitan Mor Ostatheos Sleeba by Patrarch Ignatius Abdallah II in the Church of the Holy Forty Martyrs of Sebaste in Nineveh, who promptly appointed him as patriarchal exarch to the Malankara Orthodox Church.

Due to the schism many of the Malankara Orthodox parishes in central and southern Kerala were divided into warring factions (northern Kerala at this time largely remained faithful to the Patriarchate of Antioch). Where the patriarchal Malankara Orthodox were not in the clear majority Eustathius encouraged them to peacefully withdraw from the disputes and build new churches for themselves. It was this that resulted in the building of St. Mary's Simhasana Church in Kunnamkulam, whose consecration Eustathius celebrated in 1919. 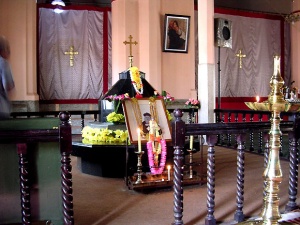 Despite his advanced age Eustathius continued to travel throughout Kerala, visiting the Malankara Orthodox churches, helping organize the Sunday School Movement, and leading unsuccessful negotiations to reconcile the two parts of the Orthodox Church in India.

On March 19, 1930 Metropolitan Sleeba Mor Ostatheos Bava fell asleep in the Lord at the age of 76. He was buried in St. Mary's Simhasana Church in Kunnamkulam, which has since become a significant pilgrimage center and is commonly called Bava Pally (Bava's Church) after St. Eustathius. In 2000 Patriarch Ignatius Zakka I of Antioch glorified Metropolitan Mor Ostatheos as a saint of the Church of Antioch.