Donskoy Monastery, (Russian: Донско́й монасты́рь), is monastery of the Church of Russia in the city of Moscow. Located on the southern approaches to the Moscow Kremlin, the monastery is one of a series of fortified monasteries that protected Moscow from raiding nomads during the seventeenth and early eighteenth centuries. 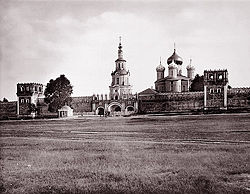 The Donskoy Monastery in 1883

In 1591, Boris Godunov caused the building of a cathedral and a small monastery honoring Theophan the Greek’s icon Our Lady of the Don that had inspired his army in defending Moscow from attacks by the Khan Kazy-Girey led Crimean Tatars. By tradition the icon had received its name from its use to inspire the forces of Grand Prince of Vladimir, who was also the Prince of Moscow, Dmitri Ivanovich, in his defeat of the Tatars in the Battle of Kulikovo in 1380, a victory for which he received the surname of Donskoy.

The cathedral, now referred to as the Old Cathedral, was completed in 1593. At first the monastery numbered only a few monks and was an appendage of the Andronikov Monastery. The monastery was overrun by Polish forces during the Time of Troubles and abandoned temporarily in the early seventeenth century . By mid-seventeenth century restoration of the monastery was underway. It was later in the century that it was enlarged and strengthen by the Regent Sophia when the monastery was needed to fend off marauding Tatars. In 1683, the abbot of the monastery was elevated to the rank of archimandrite. Construction of the New (Great) Cathedral, in a style reminiscent of that used in the Ukraine, was begun 1684 by masons and artisans from Ukraine. A sixteenth century, a copy of the Lady of the Don icon became the center piece of the eight tiered carved iconostasis. Between 1782 and 1785, the frescos in the cathedral were painted by the Italian, Antonio Claudio, the first frescos in Moscow painted by a foreigner.

Between 1686 and 1711, during the time of construction of the new cathedral, the walls around the monastery were also rebuilt, in the Moscow Baroque style. The high crenellated red walls that were erected around the Donskoy Monastery resemble the walls of Novodevichy Monastery that also incorporated twelve towers and a gate-church dedicated to the Tikhvin Virgin.

The year 1771 bought riots to Moscow as the plague ravaged the city and its environs. Ambrosius, the Metropolitan of Moscow, was caught up in the riots and fled to Donskoy Monastery where the enraged crowd cornered him and bludgeoned him to death. Another fallout of the plague and the death of Metr. Ambrosius was Catherine II’s edict banning cemeteries within the limits of the city. This led to the establishment of seven cemeteries around the city, with one at Donskoy Monastery. The Donskoy cemetery became one of the most prestigious in Moscow as the great families of the city came to use the cemetery. Among these families the princely Golitsyn and Zubov families built on the monastery grounds their private chapels, the Alexander Svirsky Church and the Archangel Church respectively.

Donskoy Monastery was also the scene of the secret baptism of Joseph Stalin’s daughter, Svetlana Alliluyeva, by the priest Nicholas Golubtsov.

During the following years of the 1920s and 1930s the monastery was used as part of a museum of architecture for storage of sculptures and ornaments from destroyed churches. In 1946, religious services were again allowed in the Old Cathedral, but it wasn’t until 1992 that the monastery was returned to the Church of Russia.

During the post-Soviet era the monastery cemetery has been the site of a number notable burials associated with anti-Soviet partisans. Alexander Solzhenitsyn was interred in the cemetery on August 6, 2008. General Vladimir Kappel, a leader in the White Army during the Russian Civil War was reburied in the cemetery on January 13, 2007, from a grave in Harbin, China. Others reburied from the Civil War era were General Anton Denikin and anti-communist philosopher Ivan Alexandrovich Il’in.