Diocese of Los Angeles and the West (Antiochian)

The Diocese of Los Angeles and the West of the Antiochian Orthodox Christian Archdiocese of North America was established as the Western Region of the archdiocese on May 5, 1964 by Bishop Antony (Bashir). Upon the granting of self-rule to the archdiocese by the Patriarchate of Antioch in 2001, the Western Region was raised to the dignity of a diocese. The diocese includes the states of Arizona, California, Nevada, and Utah. His Grace Bishop Joseph (Al-Zehlaoui), formerly the auxiliary bishop of the Western Region, was enthroned as bishop of the new diocese at St. Nicholas Cathedral, Los Angeles, California on Sunday, September 12, 2004, by Metropolitan Philip (Saliba), the ruling hierarch of the archdiocese.

The diocese includes thirty-three parishes and missions. While the parishes in the diocese are principally eastern rite, the diocese does have a western rite parish. Bp. Joseph also administers the Diocese of Eagle River and the Northwest as locum tenens, a diocese that includes twenty four parishes and missions in the American states of Alaska, Idaho, Oregon, and Washington and the Canadian provinces of Alberta, British Columbia, and Saskatchewan. 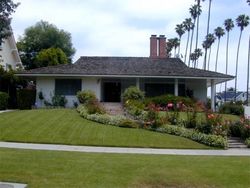 Chancery of the Diocese of Los Angeles and the West

When he first stepped onto American soil in 1920, little did Archdeacon Anthony Bashir know that he would plant the seeds that would blossom into the Diocese of Los Angeles and the West. That year, the future Metropolitan-Archbishop of the Antiochian Orthodox Christian Archdiocese of North America came to Portland, Oregon on a visit with Metropolitan Gerasimos (Messara). Shortly thereafter, Archdeacon Antony was secured to minister to the Antiochian flocks yearning for Jesus Christ throughout the United States and Canada as a priest and hierarch. As the latter, Metr. Antony, organized and established the collection of parishes in the west as the Western Region, the predecessor of the Diocese of Los Angeles and the West.

It was in Portland, Oregon, that those seeds of Antiochian Orthodox Christian Church in the western United States bore the initial fruit with the establishment of St. George Church in 1930. This was soon followed by the founding of the community of St. George in Los Angeles, California in 1933 (which later gave way to St. Nicholas in 1950). St. Nicholas in San Francisco, California was established in 1938, followed by the birth of St. George in Phoenix, Arizona in 1949, thus giving the region four parishes in three western states. The Orthodox Church in the west continued to grow as the faithful continued to establish parishes for the purpose of worship and fellowship.

Though the passing of Metr. Anthony in 1966 was indeed a sad one, a new hierarch took charge of the flock in the west and throughout all of North America. Metropolitan Philip (Saliba) was consecrated in Lebanon on August 14, 1966. His first visit to the flock was in the Western Region, as he returned to preside over the Archdiocese Convention hosted by St. Nicholas of San Francisco. Metr. Philip then visited the western churches before heading for New York to be enthroned on October 13, 1966.

By 1975, with the joyful reunification of the Archdioceses of New York and Toledo, Ohio, the number of parishes grew to ten and now included the state of Nevada. Though small in stature at this point, the Orthodox Christian witness and ministry shone brightly out west.

The west shared in the joy of the "Antiochian Holy Year" in 1977 when Patriarch Elias IV (Muawad) of Antioch was welcomed to the Western Region Parish and Family Life Conference, hosted by St. Nicholas Cathedral in Los Angeles.

Patr. Ignatius had visited the west on what would be the dawn of a new era in the Western Region. On the verge of a major growth spurt, the Antiochian Archdiocese moved to purchase the Los Angeles Chancery in 1986, which would house the future diocesan bishop and headquarters. This stately manor nestled in the Hancock Park neighborhood of Los Angeles is just three miles from St. Nicholas Cathedral. One year later, the Antiochian Archdiocese welcomed into the Orthodox Church some 2,000 members of the Evangelical Orthodox Church, bringing with them many new parishes and faithful to the west. Many of them were chrismated at St. Michael Church in Van Nuys, California; many new clergy were ordained shortly thereafter at St. Nicholas Cathedral. That year, the Western Region exploded to 27 parishes in seven states and two Canadian provinces.

Mass conversion of faithful and whole parishes into the Orthodox faith has led to a period of unprecedented growth, as the Region expanded to 47 churches and missions by the year 2000. Many former Protestants conducted extensive searches into church history, and their own souls, and discovered the Orthodox Church, the faith of the Apostles. Recent immigration fluxes from the Middle East have also contributed to the growth of the Diocese.

The Western Region had been shepherded by Metr. Philip and the auxiliary bishops of the Antiochian Archdiocese. In 1995, a permanent auxiliary bishop was assigned to the Los Angeles Chancery to lead the flock of western North America. Bishop Joseph Al-Zehlaoui makes constant visits to his parishes, carrying with him the love and grace of God as he strives to strengthen the diocese entrusted to him, making no distinction between those who have grown in the Orthodox faith and those who are new to it.

The growth of the Diocese is indeed characteristic of the Archdiocese. In 2001, Metr. Philip and the General Assembly of the Antiochian Archdiocese petitioned the Patriarchate of Antioch for Self-Rule status. When this degree was awarded, the seven geographic regions became dioceses, each being provided with a ruling diocesan bishop. Naturally, Bishop Joseph was chosen for the Diocese of Los Angeles and the West. His Grace was enthroned at St. Nicholas Cathedral on Sunday, September 12, 2004, at the hands of Metr. Philip, who served alongside Bp. Basil (Essey) of Wichita and Bp. Benjamin (Peterson) of Berkeley of the OCA. More than 1,500 faithful gathered for that glorious day. The Diocese of Los Angeles and the West now includes well over 50 parishes and missions in eight western states and three Canadian provinces. 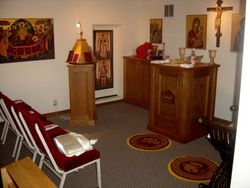 There was no specific place for prayer within the Los Angeles Chancery over the first ten years of its existence. Through careful planning and design, a former basement bomb shelter was converted into a shelter for all. Through the efforts of Mr. Michael Malouf (designer and contractor) and the contributions of many, the Chapel of the Holy Dormition was completed in 2005.

On the morning of Tuesday, March 8, 2005, 34 clergy and laity from southern California gathered to witness the consecration. The chapel was dedicated to the Holy Theotokos and specifically the Feast of her Falling-Asleep.

Celebrating the Service of Consecration with His Grace were Father Paul Doyle, the Protosyngellos of the Antiochian Archdiocese and Dean Emeritus of the Diocese's Southern California Deanery; and Archdeacon George Shishim of the Diocese of Los Angeles and the West. The icons of the Chapel were painted by the hand of Khouriyee Bonnie Gillis of the Orthodox Mission in Langley, British Columbia. Two of these "windows to heaven" depicted the Dormition, with the vibrant colors bringing the faithful to that very scene nearly 2,000 years ago.

Bishop Joseph secured relics of Saint Innocent of Alaska and Saint Thekla the Protomartyr which were enshrined in the altar.

Diocese of Los Angeles and the West