From OrthodoxWiki
Jump to: navigation, search
This article or section needs to be "Orthodoxized"/MCBed, that is, rewritten from a Mainstream Chalcedonian Orthodox point of view. Specific recommendations for its Orthodoxizing may be found on the talk page. You can help OrthodoxWiki by editing it.

Benjamin is also the name of an Ecumenical Patriarch

Benjamin (Hebrew: בִּנְיָמִין - standard transliteration Binyamin) is an Old Testament figure. The name literally translates to "son of right," generally taken to mean "son of my right hand," the "right" direction having the connotation of strength or desirability. He was the youngest son of Jacob and Rachel (Genesis 35:18). The Orthodox Church remembers the Righteous Benjamin on the Sunday of the Forefathers.

His birth took place on the road between Bethel and Ephrath, which is identified with Bethlehem (Genesis 35:19). His mother Rachel died in childbirth, and with her last breath named him Ben-oni ("son of my pain"), an ill-omened name which was changed by his father into Binyamin. His posterity were the tribe of Benjamin, sometimes translated "Benjamites" (Genesis 49:27; Deuteronomy 33:12; Joshua 18:21).

The tribe of Benjamin at the Exodus was the smallest aside from tribe of Manasseh, which was split off from tribe of Joseph (Numbers 1:34-1:37; Psalms 68:27). During the march its place was along with Manasseh and Ephraim on the west of the tabernacle. At the entrance into Canaan it counted 45,600 warriors. It has been inferred by some from the words of Jacob (Genesis 49:27) that the figure of a wolf was on the tribal standard: "Benjamin is a wolf that raveneth; in the morning he shall devour the prey, at evening he shall divide the spoil."

This tribe is mentioned in Epistle to the Romans 11:1 and Philippians 3:5.

The inheritance of this tribe lay immediately to the south of that of Ephraim, and was about 26 miles in length and 12 in breadth. Its eastern boundary was the Jordan River. tribe of Dan intervened between it and the Philistines. Its chief towns are named in Josh. 18:21-28.

The history of the tribe contains a sad record of a desolating civil war in which they were engaged with the other eleven tribes; they were almost exterminated (Judg. 20:20, 21; 21:10).

Benjamin was the son of Jacob and Rachel, the youngest of Jacob's twelve sons and full blood brother to Joseph. Benjamin's early years are not divulged too deeply, but what is known is that he did not feel jealousy towards Joseph as their older brothers did and he had no involvement in Joseph being sold into slavery.

Once Joseph was sold and thought to be dead, it appears that Jacob took Benjamin up as his favorite son. Though this is not directly said, he did not send Benjamin with his older brothers to Egypt and when they returned for him it took them two years to convince Jacob to let him go.

Benjamin was key in Joseph's plan in testing their brothers to see if they had really changed. When they arrived in Egypt he demanded that they bring Benjamin back with them on the pretense that they prove they are not spies, while he kept Simeon as collateral. After two years they do return with Benjamin and though he doesn't recognize his brother, Joseph is very happy to see him:

When Joseph looked around he saw his own mother's son, his brother Benjamin and asked, 'Is this your youngest brother, of whom you told me?' and to Benjamin he said, 'May God be gracious to you, my son!' Joseph, suddenly overcome by his feelings for his brother, was almost in tears, and he went into the inner room and wept. (Genesis 43:29-30)

Later Joseph had his silver cup planted in Benjamin's sack and then had him arrested for theft. This was still part of his plan in testing their older brothers. When the brothers pleaded his case and even Judah offers to stay in his place, Joseph reveals himself to his brothers and hugs Benjamin first.

On his deathbed, Jacob blesses each one of his sons, usually based upon the actions they took in life. Though Benjamin had no involvement in Joseph's enslavement and there doesn't seem to be much evidence that he was troublesome, Jacob bestows upon him a rather somber blessing:

Benjamin is a ravening wolf, in the morning he devours the prey, in the evening he snatches a share of the spoil. (Genesis 49:27)

The tomb of Benjamin 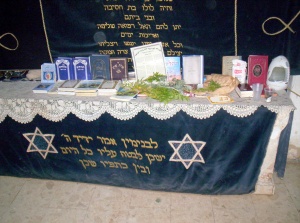 The tomb of Benjamin

The tomb of Benjamin, according to one tradition, is located in Israel on the road from Kefar-Sava to Kochav-Yair, west of Kalkilia. This location used to be located on the main road from north (Galilee, Syria, and beyond) and south (Egypt). The next stop south was Jaljulia, the Gilgal of the Sharon. The tomb is called by the Arabs "E Neby Yamin" Neby. On the north side of the tomb is an Arabic stone plate which praises the Lord. A nearby agricultural village, Neve Yamin, is named after the tomb. The site was populated in the late Roman and Byzantine periods (2nd to 7th C AD). There are two wells, of which one can be seen near the tomb. The tomb, and some of the ruins around it, are from the Mameluke period (14th C AD). A hostel (Khan) nearby has a stone plate with the date of 1312.