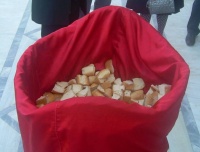 Antidoron (from Greek, meaning "instead of the gifts"; in Arabic, qurban) is the remaining bread from a loaf of prosphora after the Lamb has been removed for the Holy Eucharist. In Byzantine practice, it is blessed during the megalynarion to the Theotokos immediately after the epiclesis in the Divine Liturgy and is given by the priest to the faithful after the service. Historically, it was distributed only to those who had not received 'the Gifts', Holy Communion so that they would receive a Blessing in place of Holy Communion but this practice has changed over time and all those present at the Divine Liturgy receive Antidoron as a blessing.

In some practice, antidoron may be distributed to non-Orthodox Christians who attend an Orthodox liturgy, but in other places, it is reserved only for the faithful. Portions that are uneaten are disposed of either by burning or by being placed outside where they are consumed by the elements or by animals.