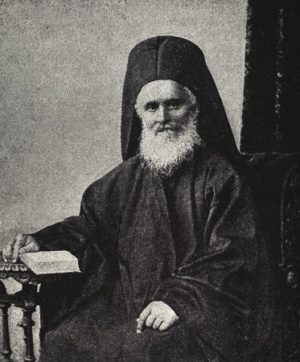 His All-Holiness Anthimus VII (Tsatsos) of Constantinople was Patriarch of Constantinople during two years of the last decade of the nineteenth century, 1895 and 1896. He was a theologian and orator who was most remembered as a critic of the Roman Pope Leo XIII's encyclical of June 1894.

Little is known of his life. Patr. Anthimus was born about the year 1835, possibly in Ioannina, Greece.

After Pope Leo XIII's encyclical Praeclara Gratulationis Publicae was promulgated on June 20, 1894, Patriarch Anthimus issued a critique refuting the proposed grounds for the reunion of the Orthodox and Roman churches. While he cited the traditional Eastern arguments against Western corruption of early Christian doctrine, Patriarch Anthimus added new charges that were occasioned by the teachings formulated by the Roman Church during the nineteenth century. Patriarch Anthimus accused the Roman Church of introducing new approaches to Christian faith, such as, the pronouncement by Pope Pius IX in 1854 of the dogma of the Immaculate Conception of the Virgin Mary wherein she was exempt from original sin, and the decree of the Vatican Council of 1869–70 on papal infallibility.

Patriarch Anthimus reposed during December 1913 after he was succeeded by Constantine V as patriarch and had retired to Halki.