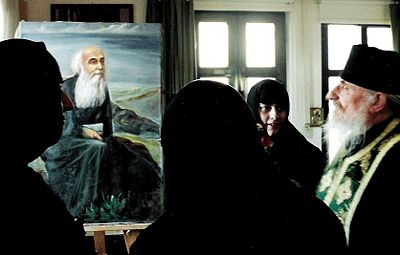 Father Elias (Annunciation Monastery in Patmos) is watching the portrait of Father Amphilochios, the founder of the monastery.

St. Amphilochios of Patmos (Makris) was a priestmonk who lived on Patmos (Greece). He was glorified on August 29 2018. His feast day is April 16.

The future elder was born on December 13, 1889 to Emmanuel and Irene Makris and named Athanasios. He was born into a large family of simple, country folk. Even as an infant, Athanasios was devout, even observing the fasting rules regarding milk products while still an infant. When Athanasios was five, he convinced his newly-engaged godmother to spend the rest of her days in virginity. Athanasios, having preserved himself from worldly temptations, decided to enter a monastery at the age of seventeen. He asked his parents' blessing, which they were happy to give.

In March, 1906, he entered the Monastery of St. John the Theologian, Patmos; in August, having earned the love of the aging brotherhood, he was made a rassophore and given the name Amphilochios. To fight the passions and temptations, Amphilochios would employ strict fasting - ten mouthfuls of food at each meal on standard days, with seven or eight olives on fast days.

In 1911, the abbot of the Monastery of St. John the Theologian sent Amphilochios to Mount Athos in order to learn wood-carving; in March 1913, he was tonsured to the Great Schema by Elder Antoniadis. Two months later, the abbot had the agreement of the brethren of the monastery to ordain Amphilochios; but, because of a self-perception of inadequacy, he asked his traveling companion (and ordinand) to continue while Amphilochios went to Egypt and the Holy Lands. Amphilochios asked the Patriarch of Jerusalem to receive him as one of the caretakers of the Holy Sepulchre. While the Patriarch was willing to do this, the Monastery insisted that he return, where they "punished" him by sending him to the hermitage of Apollo, alongside Elder Makarios, which made Amphilochios very happy as he was better able to pray.

However, in 1919, Fr Amphilochios was ordained to the diaconate and, soon after, to the priesthood. He was assigned to the monastery's dependency on the island of Kos, also serving as confessor throughout the Dodecanese. In 1926, he was sent to the Cave of the Apocalypse, Patmos. He spent much time with students of the Ecclesiastical Academy, which produced numerous elders and abbots.

In 1935, the occupying powers of the Dodecanese were the Italians, who influenced the Church by forcing a system of governance that made it easy to manipulate the Church. However, the Patriarch of Constantinople demanded that this situation be rectified for the new abbot. In response, the brotherhood elected Elder Amphilochios as abbot. Soon after, the seeds of the future female Monastery of the Annunciation began to be planted: the first building housed a training workshop for knitting and weaving, a guise under which to teach children Greek. In response, in 1937, the Italians exiled Elder Amphilochios to mainland Greece, where the Elder received hospitality from the Zoe brotherhood in Athens, from whence he traveled throughout Greece; after which he traveled to Crete, where he became spiritual father of the island.

His exile ended in 1939, and Elder Amphilochios returned to Patmos, being received with great joy. He did not, however, reassume his abbacy, but rather, focused on dependencies and the female Monastery of the Annunciation. The changeover of power in 1942, from the Italians to the Germans, did not greatly impact on the Elder's life. In 1947, Elder Amphilochios organised a small group of nuns to assist the orphans of Rhodes (at that time, extremely poor) by establishing an orphanage, along with a unit for pregnant women.

At Easter, 1968, Elder Amphilochios received a forewarning of his coming repose, and was given two years to prepare himself and his children for his repose. Anxious for his spiritual children, he asked God with tears for more time to develop his children, after which the Mother of God and St. John the Theologian appeared to him and informed him that his request was denied. Soon after this, he received a bout of flu. Having made his final preparations, he reposed on April 16, 1970.

"Do not be afraid because of your Orthodoxy; do not be afraid because, as an Orthodox in the West, you will be often isolated and always in a small minority. Do not make compromises but do not attack other Christians; do not be either defensive or aggressive; simply be yourself." — related by Bishop Kallistos (Ware), 2000, "The Spiritual Guide in Orthodox Christianity", in The Inner Kingdom: Volume One of the Collected Works, St. Vladimir's Press, Crestwood, New York, p. 150.

"Do you know there is an eleventh commandment not recorded in the Bible, and it says, 'Love the trees.' Those who do not love trees do not love Christ." — related by Bishop Kallistos (Ware), "The Message of St. Gregory Palamas for the World Today", a lecture recorded at Ohio State University on April 9, 2002. Sponsored by Hilandar Research Library.