From OrthodoxWiki
(Redirected from Adam)
Jump to: navigation, search Christ is depicted raising Adam and Eve from the grave in this icon of the Resurrection.

Adam and Eve were, according to the Book of Genesis, the first-created man and woman. In the Septuagint (though not in liturgical texts or icons), Adam's wife is identified with the name Zoe ("life").

Adam and Eve are primarily remembered in the context of the Fall. They are remembered for the suffering which they share together because of their sin: eating of the Tree of Knowledge of Good and Evil. Adam is traditionally identified as the one ultimately responsible for the introduction of sin into humanity, but in the creation accounts of Genesis, both Adam and Eve are listed as having been created without any sense of subordination of one to the other. Thus, Adam's place is not as a lord over Eve, but rather as the representative of the family. As such, he is her equal, but the introduction of human sin is placed at his feet.

In terms of their place in theology, Adam and Eve are the starting point for anthropology, which is the doctrine of the nature of mankind, and are cited in Jesus Christ’s references in the Holy Gospels to marriage as being between a man and a woman. Additionally, in terms of soteriology, Adam and Eve are seen as types of Christ and of his mother, the Theotokos, who are the New Adam and the New Eve, respectively.

Though the couple are remembered most for their sin, many icons of the Resurrection depict Christ raising Adam and Eve out of their tombs. In many icons of the All Saints type, they are depicted as worshiping at the throne of God, and the traditional nimbus (halo), signifying holiness, is around each of their heads. There are also many liturgical references to Christ's redemption of "the first-created." Therefore, the Church's tradition could be taken literally to indicate that they are among the saved. However, Adam and Eve are also quite often used to indicate fallen humanity collectively, especially in contrast to Jesus Christ, the new Adam.

The Church Fathers most often viewed the Genesis account of Adam and Eve as both literally historical and typologically symbolic, as indicated in the exhaustive collection of patristic references by Father Seraphim Rose compiled by Abbot Damascene Christiansen in the late-twentieth-century English-language book “Genesis, Creation, and Early Man”. That patristic combination of literal and symbolic interpretation, evident also in Church hymnology, problematizes attempts to link Orthodox exegesis to modern liberal Protestant and Catholic views of theistic evolution. Yet Father Seraphim also argued for differences between Orthodox cosmological teachings and conservative Protestant creationist views, despite his interest in recent creationist and “intelligent design” analyses from Protestant sources.

The primary difference between such evangelical Protestant and Orthodox teachings regarding Adam and Eve in Father Seraphim’s view lay in the Orthodox emphasis on life before the Fall as unknowable mystery, and in Orthodox anthropology that emphasizes the Fall as a catastrophic Ancestral Sin making man susceptible to sin and death—not involving the personal inherited guilt of Augustinian Original Sin taught in many Roman Catholic and Protestant traditions. In addition, he saw the Church’s exegetical tradition of often reading Scripture both literally and symbolically at the same time as distinct from both modern liberal and conservative biblical studies of Adam and Eve among many Protestants and Roman Catholics. Fr. John Romanides’ late twentieth-century study “Ancestral Sin” also collects Orthodox patristic teachings in English on the issue of the Fall. 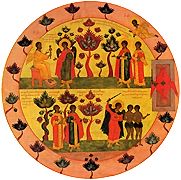 Expulsion from Eden
The Orthodox Church remembers Adam and Eve and the expulsion from Paradise on Forgiveness Sunday, the final day of pre-Lent. The faithful are given the opportunity to consider man's fallen state which is our inheritance, the benefits of fasting which our first parents ignored by breaking the fast, and the consequences of disobedience which are spiritual death and destruction.