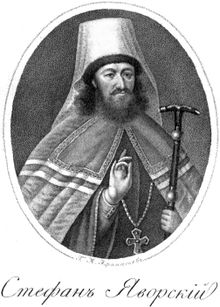 Metropolitan Stephen (secular name Simeon Ivanovich Yavorsky, Russian: Симеон Иванович Яворский; 1658 – 8 december [OS 27 november] 1722) was a metropolitan of Ryazan and Murom and statesman in the Russian Empire. Patriarchal locum tenens (1701-1721). One of the ablest coadjutors of Peter the Great and the first president of the Apostolic Governing Synod.

Born in Yavorov near Lvov, Yavorsky was educated at the Kiev-Mohyla Academy and various other schools of the Polish-Lithuanian Commonwealth. Becoming a monk, he settled at the Kiev Academy as a preacher and professor, being appointed prefect of the institution and prior of the monastery of St. Nicholas. He attracted the attention of Peter I by his funeral oration over the boyar Aleksei Shein, and was made archbishop of Ryazan in 1700.

In 1700, on the death of Adrian, the last patriarch of Moscow, Stephen Yavorsky was appointed custodian of the spiritualities of the patriarchal see. Notwithstanding frequent collisions with Peter, and his partiality for the unfortunate Tsarevich Alexius, Stephen Yavorsky was too valuable a man to be discarded.

In 1721 he was made first president of the newly erected Holy Synod, but died in the following year. After that Stephen's duties were conferred on Theophan Prokopovich.

Yavorsky was also a noted poet and composer.