Pskov (Russian: Псков; ancient Russian spelling Пльсковъ Pleskov; Estonian Pihkva) is one of the oldest cities of Russia and has been of considerable importance in the history of Russia and the Russian Orthodox Church. In twelfth century, under the religious leadership of Archbishop Nifont, Pskov, with Novgorod, was a prominent center in the Christian missionary efforts among the heathen tribes in northwest area of the Russian plain.

The city formed around the kremlin that was built at the confluence of the Pskova and the Velikaya Rivers. Initially, built of wood, the first stone walls of the kremlin were built in 1309 and completely replaced the wooden structure in 1380, including erection of the nine towers. 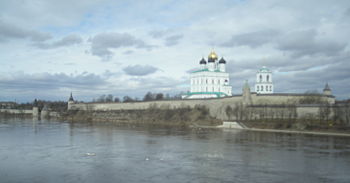 Pskov Kremlin with Trinity Cathedral above the Velikaya River

The earliest mention of the city, originally known as Pleskov, comes in 903. At that time, Igor of Kiev married a local noblewoman who was later canonized as St. Olga (Helena). St. Olga was the first noble of ancient Rus to accept Orthodox Christianity. Her grandson and pupil Vladimir of Kiev directed the conversion of all Kievan Rus to Holy Orthodoxy in 988. The first prince of Pskov was St. Vladimir's younger son Sudislav. During the twelfth and thirteenth centuries, the town was politically attached to the Novgorod Republic. In 1241, Pskov was captured by the Teutonic knights, but it was liberated by St. Alexander Nevsky after he defeated the knights in April 1242 on the ice of Lake Chudskoye (Peipus).

Mirozhsky Monastery on the Velikaya River in Pskov, Russia.

In order to secure their independence, the Pskovians, in 1266, elected as their prince a Lithuanian prince, named Dovmont, who had been baptized into Orthodox Christianity with the name Timothy, Having fortified the town, Dovmont defeated the knights at Rakovor. His relics and sword are preserved in the ancient kremlin of Pskov. The core of this citadel, that was erected by him, is still referred to as "Dovmont's town". By the fourteenth century, Pskov functioned as the capital of a sovereign republic whose most powerful political force was the merchant class that brought the town into the Hanseatic league. Pskov's sovereignty was formally recognized by Novgorod in 1348. The resulting Pskov Charter was a principal source for the all-Russian law code issued in 1497.

For greater Russia, Pskov was a bridge with Scandinavia and western Europe. As a western outpost of Russia, it was subject to numerous attacks throughout its history. The kremlin withstood 26 sieges during the fifteenth century alone. At one point, five stone walls surrounded the city, making it practically impregnable. A local school of icon-painting that continues to flourish at the Mirozhsky Monastery, and local stonemasons were considered the best in Russia. Many of the unique features of Russian architecture originated in Pskov, and numerous churches and monasteries are located in the city and surrounding countryside.