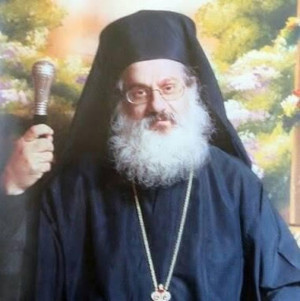 His Eminence Panteleimon of Antinoe

His Eminence, the Most Reverend Panteleimon (Lampadarios) of Antinoe is a retired archbishop of the Greek Orthodox Patriarchate of Alexandria and All Africa, having previously served as Bishop of Ghana and Metropolitan of Pilousion.

George Lampadarios was born on the island of Kalymnos, Greece on May 14, 1955. As a child he immigrated to the United States in 1958 with his parents Pantelis and Kalliope Lampadarios and lived Bridgeport, Conneticut until 1968. George became an American citizen in 1966. After he had completed his high school education in the United States he returned to Greece in September 1968 with his parents, to Kalymnos in the Dodecanese Islands.

In 1975, George entered the Monastery of St. Panteleimon where he took a monastic tonsure on April 21 and receive the name Panteleimon. While at the monastery, Panteleimon was ordained a deacon on May 25, 1980 and then a priest on December 6,1983. Over the next fifteen year Fr. Panteleimon took on various functions: a missionary priest in South Africa, a religious teacher in Greece, General Vicar of the Archdiocese of Good Hope in South Africa, and Director of the Patriarchal Press Office in Alexandria, Egypt.

On November 23, 1999, Fr. Panteleimon was elected the first Bishop of Ghana by the Holy Synod of the Church of Alexandria. Following his consecration on November 30, 1999, Bp. Panteleimon traveled to Ghana. On January 18, 2000, he arrived in Ghana and began visiting the villages of the country. He presided over a spiritual revival among the parishes of the diocese.

On October 24, 2004, Bp. Panteleimon was elevated to Metropolitan and transferred to the Archdiocese of Pilousion (Port Said) where he remained until his retirement in 2006 as Archbishop of Antinoe.