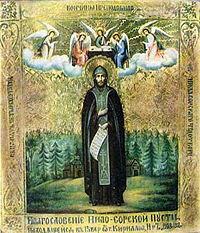 Nilus of Sora, also Nil Sorsky and Nil Sorski, in Russian: Нил Сорский, was a leader in the establishment in Russia of skete style monasticism in the fifteenth century and of a movement that opposed ecclesiastic ownership of land, a movement known as non-possessors. While not formally glorified, he is venerated as a saint in the Church of Russia. His feast day is on the anniversary of his death on May 7.

Born to the world around the year 1443 as Nikolai Maikov (in Russian: Николай Майков), Nilus was probably of peasant origin. While some writers have attributed to him noble origins, he described himself as poselyanin (rural inhabitant). Little is known of his early years. The chronology of his life and travels are sketchy. He entered monastic life early and was tonsured while still a youth. He joined the monastery of St Cyril of Belozersk (White Lake) whose founder Cyril of Beloozero was known to be hostile toward monastic landownership, and who had rejected villages offered to him by devout nobles.

It is not known how long he stayed at Belozersk, but he departed at some point and traveled with his disciple, Innocent (who became St Innocent of Komel), to Mount Athos in Greece where they were accepted into the Russian monastery. At Athos, Nilus began years of dedicated reading, translation, and study of the church fathers. Also, at Athos he further developed his practice of “mental prayer”, with the Jesus Prayer the center of his contemplative devotion. He is thought to have visited nearby monasteries before returning again to the St Cyril monastery in Russia where he put into use the spirit of Greek monasticism. He built a cell outside the cloister, but found his devotions and contemplations were constantly interrupted by people seeking his advice and company. So, he moved further from the monastery.

Having found shortcomings with large monastery, Nilus brought to Russia the concept of smaller communities, sketes, as a third form of monastic life other than large cenobitic communities and solitary eremetric monastic life. In this form of monasticism Nilus looked to life of voluntary solitude in which monastics could honor their vows more fully and avoid the corruption of materialism prevalent in the land owning monasteries. It was along the Sora River, near Belozersk, that he started his skete about 1473. Others soon followed and joined him in this isolation, and of these he demanded devotion to God and obedience to the rules of the Skete. He looked upon himself as the equal of those who sought his council and did not claim any titles or superior spiritual status.

Although the lives of the monks were centered around prayer and devotional work, for Nilus and the monks of the skete, each was responsible for his own upkeep and sustenance. Nilus required that monks participate in productive labor and spoke in support of monastic reforms on a basis of a secluded and modest lifestyle. The monks also took upon themselves copying and correcting the translated church texts in the existing manuscripts. Nilus was thought to have had compiled a compendium of the lives of the saints, which is lost.

Nilus, his followers, and disciples lived a simple, relatively obscure, and peaceful life, far different from the large and wealth monastic institutions that had become a part of the Russian culture. For Nilus, these developments were signs of the Church losing its way, as greed and lust for power and control grew within the church hierarchy. His teachings differed from the norms of church life of the time. He developed mystical and ascetical ideas along the lines of hesychasm that asked believers to concentrate on their inner world and personal experiences of faith as means for achieving unity with God.

In the latter part of the fifteenth century a small group of intellectual ecclesiastics centered around Novgorod began to criticize the church for its excesses. Since these people seemed to assert a return to Old Testament interpretations they were called Judaizers. Among the positions voiced by this group was criticism of the growth in wealth and landholding by the monasteries and the Church. They sought return to a simpler type of spiritual and devotional life. In 1487, Archbishop Gennady of Novgorod learned of this group, which was considered heretical. and began to move to eliminate them, as he considered that Moscow clerical and political authorities were not taking them seriously. In 1490, after the death of Archbishop Gerontius of Moscow, an opponent of Gennady, a synod was called to consider the matter. As the meeting of the synod neared, Abp. Gennady found an ally in the person of Abbot Joseph Volotsky, of the large Volokolamsk Monastery, who supported large monastery holding and held strong ideas how apostates should be treated, including death for the leaders of the Judaizers and imprisonment for others.

At the Synod of 1490, Nilus and Paisius Yaroslavov opposed both the secular persecution and ecclesiastic trial of heretics and apostates, and questioned the church’s role in bringing them back to the church other than through admonition, prayer, and example. Nilus resolutely opposed capital punishment. His position was a revolutionary approach outside the traditional standards of the day, including those of western Christianity. At the close of the Synod only a few priests were condemned and defrocked without being executed. After the Synod closed, Nilus and his followers returned to the wilderness, to their lives of prayerful contemplation and a return to God.

Nilus continued his efforts against monastic landownership at the Synod of 1503. At the Synod, held in Moscow, he questioned the existence of monastic estates. At the time the monastic real estate comprised about one third of the territory of the entire Russian state. He further voiced that this wealth was responsible for demoralizing the monastic communities in Russia. He spoke in favor of the policy of Ivan III to secularize monastic lands. In this view he was supported by the monks and elders of the St Cyril of Belozersk monastery and his disciple Vassian Patrikeyev.

However, after Nilus’ death, Joseph and his supporters prevailed and persecutions of the Judaizers were instituted. As a fallout of this dispute, two views emerged over the issue of church property, one that followed the austere life of Nilus and his followers, the ‘‘non-processors’’ and the others that followed Joseph and supported the ownership of property, the ‘‘processors’‘.

While Joseph’s position, with the power of the secular as well as clerical worlds, came to dominate the Russian culture, the life of the non-possessors served to moderate the excesses of the possessors. Nilus did not live long enough to see the end of the struggle that was continued by his successors Patrikeyev and Artemis.

Nilus died on May 7, 1508, at the age of seventy five, leaving in his will instructions for a simple burial and regimen for the continued life in the skete after his death: It has always been my earnest striving as far as my strength allowed to receive no honor or praise in this monastery life, so be it after my death. I beg all to pray for my sinful soul, and I ask pardon from all as I forgive all. May God pardon us all.