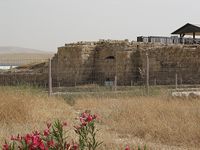 The founder of the monastery, Martyrius, was born in Cappadocia. In the year 457, he entered the Monastery of Euthymius east of Jerusalem. Finding the monastery crowded and looking to live as a hermit, Martyrius moved to a near by cave. Over the next two centuries, Martyrius' cave grew to be a major monastic center, the largest of its kind, in the Judean desert before it was abandoned in the mid seventh century after the Arab conquests in the Holy Land. During its active era, the monastery, one of many in the area, housed hundreds of monks.

The archeological remains of Patr. Martyrius' monastery were found in the early 1980s during the building of the new town of Ma'ale Adumim located in the West Bank. On the top of a hill, a monastery compound was found of about 2.5 acres, surrounded by walls. In addition to the building complex, the monastery included a system for storing water through channels that collected and directed rainwater to a number of cisterns cut into rock.

The monastery building complex included cells for the monks, a church, a number of chapels, a refectory with a kitchen and storeroom, and a bathhouse all built around a central courtyard with an entrance from the outside through a gate on the east wall of the enclosure. The complex also included stalls and mangers for animals. A hostel for travelers and spilgrims was located outside the wall.

The floors of the principal buildings of the complex were covered by mosaics of which much survived except in the church. The hostel outside the gate incorporated a chapel, bedrooms, and a stable that catered to the needs of visiting pilgrims.

The great age of the monasteries in Palestine began to end with the invasion of the Persians in 614, in which the Monastery of Martyrius suffered damage, and ended with the conquest of Palestine by Arab forces in the 630s, after which the monastery was abandoned.