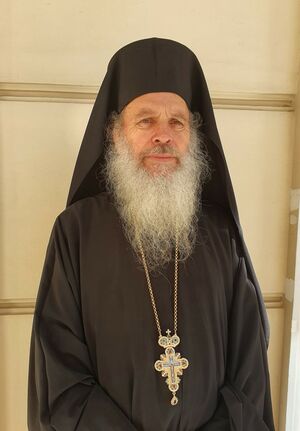 His Grace Germanos of Damietta

His Grace Germanos (Galanis), Bishop of Damietta, is a titular hierarch of the Church of Alexandria.

In 1951, the future bishop was born as Nikolaos Galanis in Drymos, Thessaloniki, during the times of Metropolitan Panteleimon (Papageorgiou) of Thessaloniki (1951–1968). He studied Theology at the Theological School of Thessaloniki, and accepted the monastic tonsure when he was twenty-one years old, on February 9, 1973.

Hieromonk Germanos was later elected hegumen of the Monastery of the Holy Trinity in Langadas, while serving as protosyncellus of the Metropolis of Langadas.

In 2010, Hegumen Germanos was transferred to the Metropolis of Ierissos under Metropolitan Nikodimos (Anagnostou) of Ierissos (1981–2012) and his successor, His Eminence Theoklitos (Athanasopoulos) of Ierissos.

On November 25, 2019, during His Beatitude Theodoros II of Alexandria's 15th anniversary since his election, Hegumen Germanos was made titular Bishop of Damietta.