Assembly of Canonical Orthodox Bishops of the United States of America

From OrthodoxWiki
(Redirected from Episcopal Assembly of North and Central America)
Jump to: navigation, search 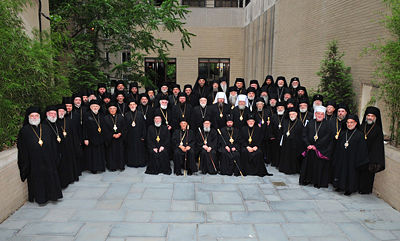 The primary purpose of the Assembly is to prepare the Orthodox of the region for an upcoming "Great and Holy Council" which will include all Orthodox bishops throughout the world (date to be announced). While participating in that council, the bishops of the Assembly will present their recommendations for the regularization of canonical order in their region. The secondary purpose of the Assembly is to provide a forum for the formation of a common pastoral vision in the region, examining various matters of common concern.

The Episcopal Assemblies derive their authority and basic rules of operation from the decisions of the Fourth Pre-Conciliar Pan-Orthodox Conference held at the Orthodox Center of the Ecumenical Patriarchate in Chambésy, Switzerland, from June 6-12, 2009.

At the first meeting of the Assembly, May 26-28, 2010, the SCOBA members present voted to dissolve the organization and permit the Assembly to supersede it and assume all its functions, agencies and ministries. It differs from SCOBA in two significant respects: it includes all the Orthodox bishops in the region (not just the primates), and it was officially mandated by the hierachies of the mother churches (rather than being of purely local provenance). It is also notable in that it is the first pan-Orthodox body in North America to include bishops of the ROCOR.

At the 2010 meeting, officers were also elected and committees formed to work together on numerous issues of common concern to the Orthodox in the region. It was further decided to request of the mother churches that Canada be given its own Episcopal Assembly and that the bishops of Central America be allowed to join the Episcopal Assembly of South America. In April 2014, it was announced that the Canadian and United States bishops would form separate assemblies and that the Central American bishops would join the Assembly of Canonical Orthodox Bishops of Latin America.

The Secretariat of the Assembly, led by Bp. Basil (Essey), is headquartered in Wichita, Kansas.[1]

On September 21, 2010, a group of leaders of the Bishops' Assembly of North and Central America was received in audience by His Holiness Patriarch Bartholomew of Constantinople at his residence at Fanar in Istanbul, Turkey. The delegation included Archbishop Demetrios of the Greek Orthodox Archdiocese in America, president of the Bishops' Assembly; Archbishop Justinian of Naro-Fominsk, vice-president of the assembly, administrator of the Moscow Patriarchate parishes in the USA; Bishop Basil of Wichita and Central America, Patriarchate of Antioch, secretary of the assembly; and Archbishop Anthony of Hierapolis, Ukrainian Orthodox Church in the USA, Patriarchate of Constantinople, treasurer of the assembly. They were invited to the Fanar by Patriarch Bartholomew who wished to discuss the results of the first plenary meeting of the assembly which took place on May 26-28 in New York and to exchange opinions on the ways of its further work.[1]