A crypt is an architectural feature found in churches of Europe, particularly in western Europe, that may be used as a chapel or a burial place. The crypt is located in the lower part of the church usually under the main floor, generally underground.

The word crypt is from the Greek: κρυπτη, kryptē and from the Latin: crypta that described a hiding place for people or valuable things. Crypts evolved from an early Christian practice of burying the dead in catacombs, a practice that was continuated in many monasteries in eastern Europe with burial of monks in caves on the monastery grounds. During the early centuries of the Christian Church church buildings were sometimes built over the graves of martyrs. In time, especially during the middle ages of western Europe, the crypts were built under church buildings in which the relics of the saints were entombed. The use of crypts became common with church construction from the sixth century. Notable examples include, the early crypt in St. Apollinare in Classe in Ravenna, Italy, as well as St.Germain in Auxerre, and other churches and cathedrals. The Holy Sepulchre in the Church of the Holy Sepulchre in Jerusalem is a form of a crypt. 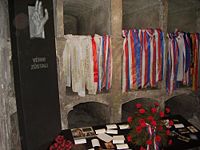 The crypt of Ss Cyril and Methodius Cathedral in Prague showing memorials to the parachutists who assassinated the Nazi SS Obergruppenfuhrer Reinhard Heydrich in May 1942.

By the beginning of the second millennium the practice had begun of placing relics on the main level of the churches, a practice that diminished the use of crypts, but did not supplant them. An eighteenth century example is the crypt of Ss. Cyril and Methodius Cathedral in Prague.

More recently, the term crypt is usually used in describing stone chambered burial vaults in which the deceased are placed. These are often found in cemeteries and under churches and cathedrals. Some wealthy or prestigious families, as well as royal families, often have a ‘family crypt’ or ‘vault’ in which the bodies of members of the family are stored. Above ground crypts have come into use, commonly called a ‘mausoleum’, for storing the remains of important people, such as the mausoleum for hierarchs of the Orthodox Church in America at the cemetery of St. Tikhon’s Monastery in South Canaan, Pennsylvania.