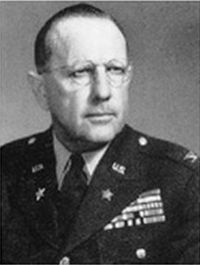 Colonel Boris T. Pash (1900-1995), an Orthodox Christian, was a U.S. Army officer whose fame came from his work as an intelligence officer in the World War II Manhattan Project (atomic bomb) and the Alsos Mission. He was also the son of Metropolitan Theophilus (Pashkovsky) of San Francisco.

As a member of General MacArthur's staff of the occupation forces of Japan immediately following World War II, Pash was instrumental in the political actions of the Americans in fending off attempts by the Soviet Union to obtain control and use the Orthodox Church in Japan for Soviet intelligence purposes.

Boris Theodorovich Pashkovsky was born on June 20, 1900, in San Francisco, California, into the family of a young Russian Orthodox missionary priest, Fr. Theodore Pashkovsky. Theodore was sent to the United States in 1894 to assist Bishop Nicholas of the North American diocese. In San Francisco, Theodore met his wife Ella Dabovich. After their marriage Theodore was ordained to the diaconate and then the priesthood. After Abp. Tikhon returned to Russia, Fr. Theodore returned Europe with his family in 1912, to a position in the Warsaw-Vilna Diocese.

In Russia, the young Boris grew up, attending a seminary school and graduating in 1917. With the start of the Russian Civil War in 1918, Boris joined the navy of the White Russian Forces. In 1920, he married Lydia Ivanov. Recognizing that the Bolsheviks were consolidating their power in Russia, Boris chose to return to the United States with his wife. Their son Edgar Pashkovsky was born in Berlin Germany while they were enroute to the United States.

After returning to the United States, Boris attended Springfield College in Springfield, Massachusetts, graduating with a B. A. degree in physical education. It was during this time that he changed his family name to Pash. Moving to the American West Coast, Boris taught at the Hollywood High School in Los Angeles and continued his education at the University of Southern California in Los Angeles, receiving a M.A. degree. He also joined the U. S. Army Reserves.

Called to active duty in 1940, Boris was assigned as a security officer with the Manhattan Project in Los Alamos, New Mexico. During the latter half of World War II, Boris was assigned as leader of Operation Alsos, an operation that moved with the advancing Allied forces, with direction to determine the progress made by the Axis toward developing nuclear weapons.

After the end of the war, in 1946, Colonel Boris Pash was assigned in Japan as a foreign liaison officer under General Douglas MacArthur on the staff of the Supreme Commander of the Allied Powers (SCAP). At the time various negotiations and correspondence were under way among offices of SCAP, the Orthodox Church of Japan, the Moscow Patriarchate and its American Exarchate, and the Soviet member of the Allied Council to Japan over the return of the Church to the governance of the Church of Russia. Among these negotiations was an attempt by the chancery of the Japanese Church to make direct contact with Church officials in the United States through an American officer in SCAP, referred to in the chancery documents as "Mr. Royster", later Abp. Dmitri of Dallas. This contact was with a Metr. Benjamin, presumably Metr. Benjamin (Fedchenkov) the metropolitan of the Russian Patriarchal Exarchate of North America. This contact died after action was referred to the Moscow Patriarchate.

Col. Pash represented SCAP in negotiations with the Japanese Church and interactions with the American Metropolia in the United States of which Col. Pash's father, Metr. Theophilus, was the leader. After the Japanese Church formally requested a bishop from the Metropolia, Col. Pash used his position to ensure that a large number of U. S. Army Orthodox believers in the Tokyo area were present at the arrival of Bishop Benjamin for his first Divine Liturgy at Nicolai-do Cathedral in Tokyo thus thwarting expected efforts by the Soviets of an international incident at the cathedral.

After his return to the United States Col. Pash held a number of other intelligence positions. While stationed in Washington D.C. in the late 1950s, he was a member of the parish of St. Nicholas Cathedral and, as a member of its board of trustees, coordinated the construction of the cathedral superstructure.

Col. Pash died in retirement on May 11, 1995 in Greenbrae, California.