Tradition tells us that the Apostles Thaddeus and Bartholomew first brought Christianity to the land of the Armenians in the first century. However, it would not be for about 200 more years that Armenia would become the first country to adopt Christianity as a state religion, in AD 301, when St. Gregory the Illuminator, a missionary from Caesarea, converted the king of Armenia, Trdat IV, to Christianity. In time, St. Gregory was sent back to Caesarea to be elevated to the episcopate and returned to Armenia as the first Catholicos (or "universal" bishop of an area). Gregory's son, Aristakes, attended the First Ecumenical Council at Nicea in AD 325.

In addition to the obvious spiritual benefits which resulted from the "baptism" of Armenia, this conversion aided in unifying various ethnic groups into a cohesive Armenian identity. The Armenian Church was instrumental in the early missions to neighboring Georgia and Caucasian Albania.

The Council of Chalcedon

However, the Armenian Orthodox Church argues that this is a wrong description of its position, as it considers Monophysitism, as taught by Eutyches and condemned at Chalcedon, a heresy and only disagrees with the formula defined by that council. The Armenian church instead adheres to the doctrine defined by Cyril of Alexandria, considered as a saint by the Chalcedonian churches as well, who described Christ as being of one incarnate nature, where both divine and human nature are united. To distinguish this from Eutychian and other versions of Monophysitism this position is called miaphysitism.

In recent times, both Chalcedonian and anti-Chalcedonian churches have developed a deeper understanding for each other's positions, recognizing the substantial agreement while maintaining their respective theological language. Hence, the Monophysite label is avoided when describing the Armenians' or Copts' belief regarding the Nature of Christ. It should be noted that the Armenian Church was not represented by its Supreme Patriarch—the Catholicos during the Council of Chalcedon, because the country was in war at the time, so instead a delegation of clergymen was sent.

The hierarch of the Armenian Church is the Supreme Patriarch and Catholicos of All Armenians. The current Catholicos is Garegin II, who resides at the Holy See of Echmiadzin, west of Yerevan. However, a minority of the church outside Armenia is under the jurisdiction of the Catholicos of Cilicia, who resides in Antilias in Lebanon, as a result of a dispute that emerged while Armenia was under Communist rule.

Armenian Christianity Outside of Armenia 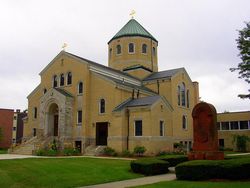 Today there are large Armenian Orthodox congreations in many middle-eastern countries outside Armenia. Of particular importance is the Armenian Apostolic Church of Iran, where Armenians are the largest Christian ethnic minority. The Armenian Church also is one of the churches (together with the Orthodox Church, the Roman Catholic Church, the Copts, Ethiopians and Syrians) which cooperates in the use and administration of the Church of the Holy Sepulchre (Jerusalem).