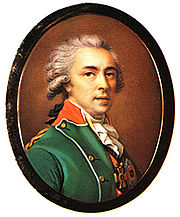 Count Aleksei Ivanovich Musin-Pushkin was a Russian statesman, historian, and art collector who, in addition to being a distinguished archaeologist, was the Ober Procurator of the Apostolic Governing Synod of the Church of Russia during the late eighteenth century.

Aleksei Ivanovich was born in 1744. While he served in the position of Ober Procurator of the Apostolic Governing Synod, a position he held from 1791 to 1797, Aleksei Ivanovich is better known for his work as an archaeologist and at the time one of the most well known collectors of artifacts of ancient Russian literature.

Late in the eighteenth century while searching through a collection of old books and parchments at the Spasso-Preobrazhensky monastery in Yaroslavl, Aleksei Ivanovich came upon an old manuscript from the sixteenth century that he began studying. As he deciphered the manuscript he realized that it was a copy of an older tale that the copier apparently did not understand. Upon closer examination, the manuscript proved to be the famous tale of the Lay of Igor's Host."

Aleksei Ivanovich's collection of antiquities included other treasures including the Laurentian Codex of the Primary Chronicle and the earliest manuscripts of Zadonshchina. In addition to his term as ober procurator, Aleksei Ivanovich was the President of the Academy of Arts and a member of the Russian Academy, as well as a member of the Society of History and Antiquities. He received his title as "Count" in 1797.