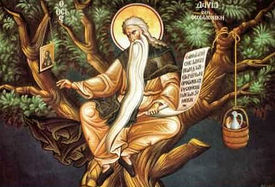 Our Venerable and God-bearing Father David of Thessalonica, also David the Dendrite ((Greek)

Ὁ Ὅσιος Δαβὶδ ἐν Θεσσαλονίκη) circa 450 AD - 540 AD, was a renowned ascetic and blessed fool of Thessaloniki, in Byzantine Greece who lived as a dendrite for three years, in a form of asceticism similar to that of the Stylite saints.

His feast day is celebrated by the Orthodox Church on June 26, while the translation of his relics is observed on September 16.[1][note 1]

Saint David came from Northern Mesopotamia, which was a great monastic center, and was born around 450 AD. For reasons not mentioned, he travelled to Thessaloniki together with the monk Adolas. Although we do not know why either David or Adolas traveled from Mesopotamia to Thessaloniki, both the Synaxarion of Constantinople and the Menologion of Emperor Basil II assure us that he did come from somewhere in the "east".

The examples of holy men of the Old Testament, in particular the Prophet and King David, prompted the Venerable David to live his ascetic ordeals by climbing up an almond tree to the right of the church (the Katholikon of the monastery) and living up there for three years, until the Lord would reveal His will to him, and grant him wisdom and humility. One source tells us that this tree was in between two churches within the monastery. This symbolic number (three) corresponds, according to the text, to the three year span in which the Prophet David gained goodness, education, and prudence, after his request to God.[2][note 5]

For three years this Saint endured the most extreme trials like the Stylite Saints, enduring the bitter cold of the winter and the burning heat of the summer and fully exposed to all the elements of the weather.[note 6]

At the end of the three years an angel of the Lord appeared to him, assuring him that his prayers had been heard, and that the period of his trial as a dendrite had ended. The angel instructed him to descend from the tree, and continue the ascetic life in silence in a cell, continuing to laud and bless God. He was foretold by this same angel that he would "accomplish one other act of love" before he died. Thus Saint David came down from the almond tree and entered a cell that had been prepared by his disciples. Saint David entered his cell in the presence of Archbishop Dorotheos of Thessaloniki (c.497-c.520) along with many pious clergy and faithful who gathered to see this momentous event when the news had spread.

Living as a recluse in his cell and for his unparalleled ascetic feats, this Saint was considered as an angel of God by the people. Many people came to seek his prayers and many healings of demonic possession, diseases and suffering are reported. In one such case, we are told a certain youth had a demon and came to the cell of the Righteous David crying out: "Release me, O David, thou servant of the eternal God, for fire comes forth from your cell and burns me." Upon hearing this David reached out his hand from his cell through a small window and held the youth, saying: "Our Lord Jesus Christ, the Son of the living God, commands you to go forth from His creature, O unclean spirit!" After doing the sign of the Cross over the youth, the demon was immediately released and all marvelled glorifying God who glorifies those who please Him with God-pleasing works.

Saint David's silence was interrupted sometime after 520 when Archbishop Dorotheos died. His successor, Archbishop Aristeides, together with a multitude of clergy and faithful came to the Saint's cell pleading that he travel to Constantinople so as to entreat Emperor Justinian (527-565) regarding the establishment of Justiniana Prima as the new capital of the Prefecture of Illyricum replacing Thessaloniki.[note 7] Archbishop Aristeides was against this, since it would demote the status of Thessaloniki and divide Illyricum. Aristeides could not travel to Constantinople because he did not want to leave the city shepherdless with the impending threats of the barbarians.

David submitted to the pleadings of the Archbishop and the people of Thessaloniki in order to fulfill the prophesy of the angel that appeared to him while on the tree and out of obedience to the bishop and the love of the people of Thessaloniki. After many years of seclusion he emerged from his cell and saw the sun for the first time in many years. His appearance had changed as well. His hair had grown to his lower back and his beard fell all the way down to his feet. Together with his two disciples, Theodore and Demetrios, they left during the night for Constantinople.

When they arrived in Constantinople his fame preceeded him and he was received with much reverence by the people of Byzantium and was especially well received with much respect and reverence by Empress Theodora who had him escorted into the palace and given hospitality as if he was an angel in the flesh. Justinian was occupied with other matters when he arrived, but was awe-struck at his holy appearance when he finally saw him the next day and listened to his case before the Senate. Before David spoke however the following miracle occurred leaving everyone astonished:

David took a piece of live coal with incense in his bare hands and together with his disciples censed the Emperor and the entire Senate and his hand did not burn though he was praying and blessing for about an hour. After this David pleaded the case of Archbishop Aristeides, and Justinian submitted to his wishes so that the status of Thessaloniki remained uninterrupted.[note 8]

The Saint returned by ship from Constantinople to Thessaloniki. However, when he arrived at Thermes at a place called Emvolos (about 126 stadia from the Saint's cell), he gave up his spirit to the Lord after making his request known to his disciples that he be buried at his monastery. This took place between the years 535–541 AD.

The ship continued on to the port of Thessaloniki, but a strong wind escorted them as if by divine providence and landed at the spot where Sts. Theodoulos and Agathopodus (April 5) were martyred on the west side of the city.

Upon hearing the news of his falling asleep, the Archbishop with a large crowd gathered to pay their last respects and by procession lead him up to the Monastery of Sts. Theodore and Mercurius where his relics were enshrined in a wooden coffin according to his wishes.

About 150 years after the Saint's death, in 685-690, the abbot of the monastery Demetrios opened his tomb in order to receive a portion of his relics. In doing so however, the plaque on the tomb fell and broke into many pieces. This was seen by the abbot as a sign that it was not the wishes of Saint David for his relics to be portioned.

A monk under Demetrios by the name of Sergius eventually became Archbishop of Thessaloniki. He was present when as a monk they had tried opening the tomb of the Saint. Honoring this occurrence, Sergius opened the tomb which emitted a beautiful fragrance from the incorrupt relics and took care to only remove some hair from the beard and head of the Saint in order to distribute to the faithful to increase their faith and help aid in their salvation.

The tomb of the Saint remained undisturbed until the Fourth Crusade in 1204. In 1236 it was taken by Crusaders to Pavia, Italy and from there transferred to Milan in 1967.

Finally on September 16, 1978 through the efforts of Metropolitan Panteleimon (Chrysofakis) of Thessalonica, the sacred relics of Saint David were triumphantly returned to Thessaloniki and housed in the Basilica of Saint Demetrios the Great Martyr. To celebrate this feast a Service was written by the renowned hymnographer Elder Gerasimos Mikragiannanitis.

Eventually the relics were transferred to the Katholikon of the Monastery of Saint Theodora in the middle of Thessaloniki in a chapel surrounded by icons of the Saint's life.[note 9]

Apolytikion in the Plagal of the Fourth Tone[3]
The image of God, was faithfully preserved in you, O Father.
For you took up the Cross and followed Christ.
By Your actions you taught us to look beyond the flesh for it passes,
rather to be concerned about the soul which is immortal.
Wherefore, O Holy David, your soul rejoices with the angels.

Kontakion in the Second Tone[3]
An Angel on earth, and stranger to all earthly things,
thou madest a tree thy dwelling like an eagle's nest,
whence, O David, thou didst soar up to Heaven,
where thou didst find that Tree which in Eden we lost of old.
Remember us all, who keep thy memory.