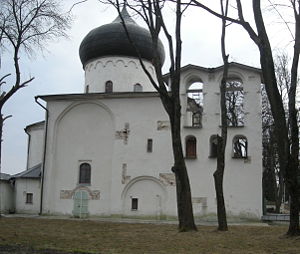 The Transfiguration Cathedral of the Mirozhsky Monastery in Pskov, Russia is one of the oldest churches of the Pskov region, dating from the twelfth century. Built before local Russian architectural concept had developed, the cathedral uses a “Byzantine” cross floor plan. The cathedral is especially renowned for the twelfth century frescos painted by Greek artists from the Mediterranean area. The cathedral is one of the best examples of the architecture and iconography of the pre-Tatar period.

In the early twelfth century, the northwestern part of Russia, centered around Novgorod, began to gain an increasing role in the political, religious, and cultural areas of Russian life that had previously center around Kiev. The archbishop of Novgorod, Nifont, was in the forefront of this religious activity. As a result of a political conflict in Novgorod, Abp. Nifont moved to Pskov, to the west of Novgorod, where he was welcomed, and he continued his missionary efforts among the pagan population.

As part of his evangelization, Abp. Nifont initiated a building program centered around new monasteries in Pskov. At the Mirozhsky monastery, his craftsmen from Novgorod teamed with Greek artisans todbuilt in the Transfiguration Cathedral a church that differed from the styles of Novgorod, a church that had an open and clear structure. The dates of the construction of the Transfiguration Cathedral are not precisely known. Based on indirectsources, the foundation may have been laid during 1137-1138 and the main superstructure completed in 1139-1140.

The building was built in the form of a cross, without a gallery, and surmounted with a surprisingly wide cupola. The design used created an interior free of obstructions that was crowned by a wide cupola that followed the Greek construction concepts of the temples in the Byzantine lands of the time. The open interior became the canvas for the extraordinary twelfth century frescos that can be seen today. 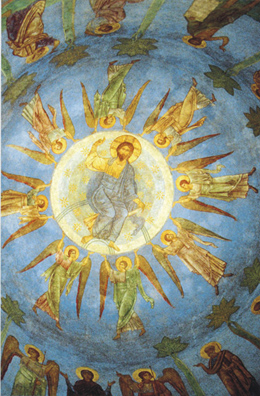 Based on some technical features that remain to this day, the artists are known to have begun their work as soon as the builders finished theirs. The fine condition of the higher level frescos resulted from architectural changes and renovations that occurred possibly as late as the seventeenth century. In the course of these changes the frescos were over painted with whitewash. In the late nineteenth century, the frescos were discovered at a time of renewed interest in Russian antiquities and the overlays of whitewash and plaster were carefully removed by a team under V. V. Suslov. In the early twentieth century the monks became discontented with the manner of restoration and initiated a change to a new team of icon painters under N. M. Saphonov who began to clean the old images and to repaint them. A renewed effort to restoration began in 1920, but even today the 1901 renovations still cover many of the fresco images. Restoration continues. The cathedral is not an active temple. Visitation is controlled to limit excessive humidity and its effects on the images.

Currently, the cathedral is part of the Pskov State Museum-Reserve of History, Architecture, and Art. The cathedral and its frescos are included on the UNESCO list of outstanding architectural landmarks of the world.