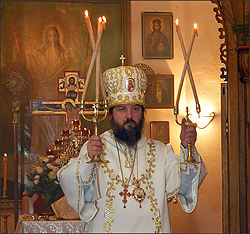 His Grace, Bishop Theodosius (Ivashchenko) is the Bishop of Seattle, Vicar Bishop of the Diocese of San Francisco and Western America (ROCOR).

He studied at the Kiev Institute of Technology before attending Kiev Seminary, becoming a monk, and being ordained Hieromonk. He served a parish 60 km. from Chernobyl, Ukraine for two years before being transferred to the Holy Land, where he served at monasteries on the Mount of Olives and in Hebron. After moving to the USA and living in a monastery in Minnesota for several years, he came to San Francisco and was assigned to serve at St.Tikhon’s Russian Orthodox Church. Fr. Theodosius was also a teacher at Ss. Cyril and Methodius Russian School and at St. John’s from 2001 to 2008.[1]

He was elected bishop in May 2008[2], and this election was confirmed by the Holy Synod of the Russian Orthodox Church on June 23rd.[3]

Bishop Theodosius was consecrated on September 7, 2008, at the Cathedral of the Mother of God "Joy of All Who Sorrow". Officiating at the consecration were His Eminence Metropolitan Hilarion of Eastern America and New York; His Eminence Archbishop Mark of Berlin, Germany and Great Britain; His Eminence Archbishop Kyrill of San Francisco and Western America; their Graces Bishop Gabriel of Montreal and Canada; Bishop Michael of Geneva and Western Europe; Bishop Peter of Cleveland; and Bishop John of Caracas.