This should not be confused with the sticheron. 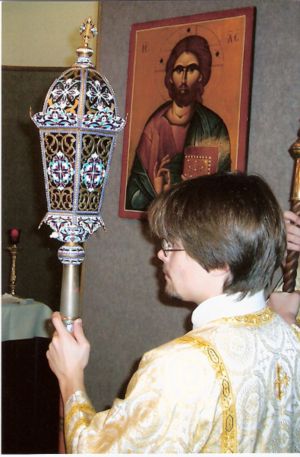 A young man wearing a sticharion while serving
The sticharion is a liturgical vestment, long and narrow, with loose sleeves, and fastened at the neck.

Worn as the undermost vestment by bishops and priests, it is usually made from a simple white or gold fabric.

Worn as an outer vestment by deacons and subdeacons, it is usually more decorated and may reflect the colour of the day. It is open down the sides but held shut with baubles or buttons.

Some jurisdictions still call the sticharion which the deacon wears a dalmatikon in accordance with the terminology the universal Church used at the time of its introduction in the fourth century.

Worn as the outer garment by acolytes it usually has a cross embroidered or appliquéd to the centre of the back, between the shoulder blades.

The Latin vestment equivalent to the sticharion is the alb. It too is a long white garment worn by the bishop or priest under the chasuble which itself is equivalent to the Eastern phelonion. The alb may be plain or decorated with embroidery or lacework, but in Latin usage is almost always white.