From OrthodoxWiki
(Redirected from Samuel)
Jump to: navigation, search 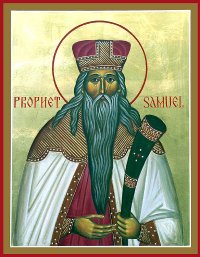 The glorious Prophet Samuel was the fifteenth and last of the Judges of Israel, living more than 1146 years before the birth of Christ. His feast day is celebrated on August 20.

Samuel was descended from the Tribe of Levi, and was the son of Elkanah from Ramathaim-Zophim of Mount Ephraim. He was born, having been besought from the Lord through the prayers of his mother Hannah (therefore he received the name Samuel, which means "besought from God"). Even before birth, he was dedicated to God. Her song, "My heart exults in the Lord," is the Third Ode of the Old Testament (I Kingdoms 2:1-10).1

When the boy reached the age of three, his mother went with him to Shiloh and in accord with her vow dedicated him to the worship of God. She gave him into the care of the High Priest Eli, who at this time was a judge over Israel. The prophet grew in the fear of God, and at twelve years of age he had a revelation that God would punish the house of the High Priest Eli, because he did not restrain the impiety of his sons. Eli's whole family was wiped out in a single day.

The prophecy was fulfilled when the Philistines, having slain in battle 30,000 Israelites (among them were also the sons of the High Priest, Hophni and Phinees), gaining victory and capturing the Ark of the Covenant. Hearing this, the High Priest Eli fell backwards from his seat at the gate, and breaking his back, he died. The wife of Phinees, upon hearing what had happened in this very hour, gave birth to a son (Ichabod) and died with the words: "The glory has departed from Israel, for the Ark of God is taken away" (I Kingdoms 4:22).

Upon the death of Eli, Samuel became the judge of the nation of Israel. The Ark of God was returned by the Philistines on their own initiative. After returning to God, the Israelites returned to all the cities that the Philistines had taken. In his old age, the Prophet Samuel made his sons Joel and Abiah judges over Israel, but they did not follow the integrity and righteous judgment of their father, since they were motivated by greed.

Then the elders of Israel, wanting the nation of God to be "like other nations" (I Kingdoms 8: 20), demanded of the Prophet Samuel that they have a king. The Prophet Samuel anointed Saul as king, but saw in this a downfall of the people, whom God Himself had governed until this time, announcing His will through His chosen saints. Resigning the position of judge, the Prophet Samuel asked the people if they consented to his continued governance, but no one stepped forward for him.

After denouncing the first king, Saul, for his disobedience to God, the Prophet Samuel anointed David as king. He had offered David asylum, saving him from the pursuit of King Saul. The Prophet Samuel died in extreme old age. His life is recorded in the Bible (I Kingdoms; Sirach 46:13-20).

In the year 406 A.D. the relics of the Prophet Samuel were transferred from Judea to Constantinople.

You were given as a precious gift to a barren womb,
And offered as a fragrant sacrifice to your Lord.
You served Him in truth and righteousness;
Wherefore we honor you, O Samuel prophet of God,
As an intercessor for our souls.2

We celebrate the memory
Of Your prophet Samuel, O Lord;
Through him we beseech You:
"Save our souls."2

You were a precious gift given to God before your conception.
You served Him like an angel from your infancy, O blessed one.
You were granted the charism to announce beforehand future things.
Therefore, we cry to you: "Rejoice, Samuel, Prophet of God and great high priest."2