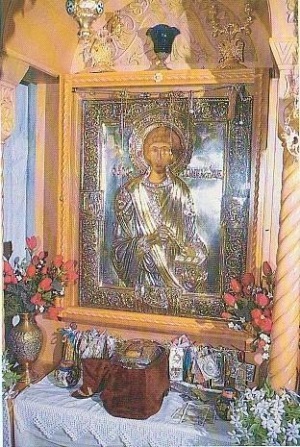 The Holy Skull and Icon of St. Panteleimon the Greatmartyr and Unmercenary, Panachrantou Monastery, Andros, Greece 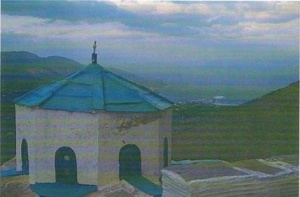 The dome of the Katholikon of Panachrantou Monastery, Andros, Greece

The establishment of the monastery is attributed to Stragegos (General) Nicephorus II Phocas in the tenth century, who subsequently became emperor of the Eastern Roman empire (ruled 963 to 969). By legend, two monks, promising to pray for his victory, asked Nikephoros for financial aid when he stopped on the island on his way to battle in Crete. He agreed and promised aid for them to build a monastery provided he was victorious. With his victory, he fulfilled his promise.

The monastery is located in the Geronakas mountainous area high on the side of Mount Katafigio at an elevation of about 2,500 feet (750 meters). Surrounded by a strong wall, the monastery appears like a "Byzantine" fortress. The site provides an exceptional view of Chora and the surrounding area.