From OrthodoxWiki
(Redirected from Monophysite)
Jump to: navigation, search 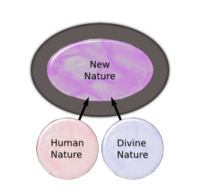 Monophysitism is a Christological heresy that originated in the 5th century A.D. Its chief proponent was the monk Eutyches, who stated that in the person of Jesus Christ the human nature was absorbed into the divine nature like a cube of sugar dissolves in a cup of water. Therefore, Christ was left with only one nature, the Divine (Greek mono- one, physis - nature). This is to be contrasted with the miaphysitism which is professed by the Oriental Orthodox churches.

Eutyches' position on monophysitism is often referred to as Eutychianism, a position that went beyond the Christology as expressed by Cyril of Alexandria and is also anathematized by non-Chalcedonians who accept the faith of Cyril. Eutyches formulated this doctrine in response to the heresy of Nestorianism, which divided the person of Christ almost to the point of having two separate persons (not two natures, as the Orthodox believe).

Another branch of monophysitism, called Apollinarianism, holds that Christ had a human body and human "living principle," but that the Divine Logos had taken the place of the nous, or "thinking principle," analogous but not identical to what might be called a mind in the present day.