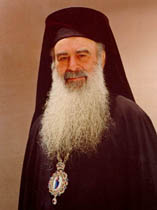 His Eminence Methodios (Fouyias) was a Archbishop, who under thejurisdiction of the Ecumenical Patriarchate served as the fourth Archbishop of Thyateira and Great Britain.

Methodios was born in 1925, in the village Kalivia, in Corinthia in the northern part of the Peloponnese peninsula. As he began his higher education Methodios entered the Holy Orders in 1947 when he was ordained a deacon. His ordination as a priest came in 1950. He attended theTheology Faculty of Athens University, receiving his bachelor degree in Theology in 1952 and, later, continued his studies at the Manchester University in Great Britain from which he received a PhD in Philosophy in 1962.

Father Methodios served as senior priest of the Hellenic Orthodox Community in Germany, Munich from 1951 to 1954. In 1954, he was appointed senior secretary of the Alexandria Patriarchate serving in that position until 1956. In 1958, Fr. Methodios was appointed the senior priest at the Hellenic Orthodox Community in Addis Ababa, Ethiopia serving until 1960. In addition, he served as a teacher at the communities Greek School. From 1966 to 1968, Fr. Methodios served as secretary of the Holy Synod of the Church of Greece. In 1968, Fr. Methodios was elected to the episcopacy, and was consecrated Metropolitan of Axum (Aksum) in Ethiopia on November 29, 1968.

In 1970, Fr. Methodios was appointed professor of theology at the Edinburgh University in Edinburgh, Scotland. In 1984, he traveled to the United States and joined the Holy Cross Greek Orthodox School of Theology in Brookline, Massachusetts as a professor.

In 1979, Metr. Methodios was elected Archbishop of Thyateira and Great Britain, a position he held until his repose on July 7, 2006 in Athens, Greece.

Abp. Methodios has written many books, among them on the subjects of Steps in the course of the youth, Hellenism and Judaism, and International dimension of Greek culture.