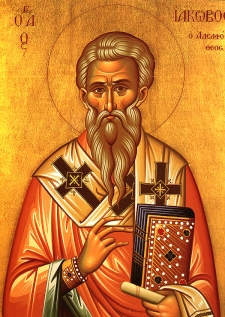 James the Brother of the Lord

The Divine Liturgy of St. James is among the oldest Eucharistic services in continuous use. It is the ancient liturgy of the Church of Jerusalem and is attributed to the Apostle James the Just, the Brother of the Lord. It is often celebrated in Eastern Orthodox Churches on the feast of St. James (October 23).

History of the Liturgy

The general scholarly consensus is that this liturgy originated in Jerusalem during the late fourth or early fifth century. It quickly became the primary liturgy in Jerusalem and Antioch. Although it was later superseded in Jerusalem and Antioch by the Liturgy of St. Basil and the Liturgy of St. John Chrysostom, it had already spread to other areas of the Church. The oldest manuscript traditions are in Greek and Syriac, and there are also extant manuscripts in Armenian, Ethiopic, Georgian, and Old Slavonic.

One leading theory today is that of John Fenwick, who argues that the similarities between this liturgy and that of St. Basil demonstrate their respective developments from a common source, now lost, but which is best preserved in the Egyptian recension of the Liturgy of St Basil. Fenwick suggests that the Liturgy of St. James was composed by St. Cyril of Jerusalem c. 370.

In the Eastern Orthodox Church, the liturgy is now generally only celebrated on the Feast of St. James, on October 23rd, and only in some parishes and monasteries, particularly in the Jerusalem Patriarchate. Two different rubrics are commonly followed; the Slavonic liturgy linked to in full below is celebrated in the traditional manner, ad orientem, on an altar behind the iconostasis, in a manner similar to the contemporary Syriac Orthodox use.

In the Greek-speaking Orthodox communities, such as in the Jerusalem Patriarchate, the liturgy is commonly celebrated in a very different manner, with a temporary altar erected in front of the iconostasis, and the celebrant conducting the liturgy versus populum. This version is frequently celebrated with 12 priests and 1 bishop, or 13 priests, in order to convey the idea of the re-enactment of the Last Supper.

In the Byzantine use, the Liturgy of the Catechumens proceeds in a manner relatively similar to that of the other Divine Liturgies. Present editions include the essentially the standard litanies, incense is offered, the Trisagion is sung, and the lessons proceed as normal. The content of some of the prayers is somewhat different, however, most notably the petition with which the celebrant concludes the Prothesis.

"Defiled as I am by many sins, do not utterly reject me, Master, Lord, our God. For see, I draw near to this divine and heavenly mystery, not as though I were worthy, but, looking to your goodness, I raise my voice to you, ‘God, be merciful to me, a sinner. For I have sinned against heaven and before you, and I am not worthy to lift up my eyes to this your sacred and spiritual Table, on which your only-begotten Son, our Lord Jesus Christ, is mystically set forth as a sacrifice by me, a sinner stained by every defilement. Therefore I bring you this supplication, that your Spirit, the Advocate, may be sent down to me, strengthening and preparing me for this ministry. And grant that without condemnation the word that has been declared by you may be proclaimed by me to the people in Christ Jesus our Lord, with whom you are blessed, together with your all-holy, good, life-giving and consubstantial Spirit, now and for ever, and to the ages of ages. Amen."

Following the Dismissal of the Catechumens, the changes in content become more noticeable, as the hymn Let All Mortal Flesh Be Silent is sung; this hymn is also sung during the Vesperal Liturgy of St. Basil on Great and Holy Saturday. The Anaphora itself is quite long, and highly formal, although it does not in present recensions stretch out to its once-legendary length (for it is said that Basil, observing the difficulty people had standing through the four hour liturgy of St. James, shortened it in his own liturgy to two and a half hours, and St. John Chrysostom, not without some annoyance, was forced to shave off an additional hour when composing his own liturgy, now the standard liturgy of the Orthodox Church, owing to the short attention span of his flock).

In the Eucharistic Epiclesis, following the words of institution, the descent of the Holy Spirit onto the Gifts is emphasized with particular vigor. This is by no means a weak epiclesis, but is as intense and passionate as that of St. John Chrysostom itself, attesting to an ancient belief in the real change of the elements.

While the Divine Liturgy of St. James is seldom celebrated in the Byzantine churches, it remains the principle liturgy of the Syriac Orthodox church, in both those ethnically Syriac parishes, and among those St. Thomas Christians in India under its jurisdiction. It is also widely used by other St. Thomas Christians in India who are not in communion with the Syriac Patriarch of Antioch, such as the Malankara Syriac Orthodox Church; its liturgical influence is even felt in the Protestant Church of South India.

In the Syriac Orthodox Church, the liturgy is always celebrated ad orientem, typically on a holy table attached to the wall at the end of the altar, with three ascending steps, richly furnished in the red and gold grapevine pattern that characterizes Syriac Orthodox vestments. A canopy is frequently present over the altar. The Liturgy of the Catechumens is always the same, however, it is used with a great variety of anaphorae, most derived from that of St. James, but others, from other sources, such as the ancient Anaphora of the Twelve Apostles.

In the Syriac Orthodox use, a series of hymns precede the unveiling of the sanctuary at the start of the liturgy, most notably the Petition of Mor Balai, followed by the hymn "By Your Light." As the curtain is unveiled, the Priest prays a Marian intercession, followed by the Metrical Homily of St. Severus "I will exalt you, O My Lord." This is followed by the chanting of the Trisagion, with the "Theopaschite Clause" ("...Who wast crucified for us...") inserted, as is standard in the Oriental Orthodox communion.

Before the reading of the Epistle, which is generally a Pauline epistle, Galatians 1:8 is sung in the form of a hymn, beginning with "I heard Paul the Blessed Apostle say..." The Epistle is commonly read in the vernacular by a lector or subdeacon, from one of the lecterns; the Gopsel is always read by the Priest on the ambo, generally from an ornate Gospel Book containing icons of the evangelists, which the Syriac faithful will kiss at the end of the Divine Liturgy. In the Syriac Orthodox church, the use of animal products in the altar is prohibited to an even stricter extent than within the Eastern Orthodox Church, and the clergy typically wear ornate liturgical slippers.

In the tradition of the Oriental Orthodox churches, the Kiss of Peace has never been restricted to clergy, but is rather conveyed to the laity in a dignified and efficient manner. Two clergy in minor orders, typically boys, will receive the kiss of peace from the celebrant, and will then proceed down each side of the central aisle. The parishioner standing close to the aisle will clasp hands with them, and then proceed to kiss their hands, before conveying the kiss down their own aisle. Those present do not move around to exchange the kiss with others not in their immediate vicinity, as in the disruptive manner in many contemporary Roman Catholic and Anglican parish churches.

A diversity of anaphorae, said to number 86, exist in the Syriac Orthodox Church, but most parishes celebrate no more than four of these in the course of the liturgical year. However, unlike in the Coptic church, the additional anaphorae that remain "On the books" are in no way officially suppressed. These anaphorae at times substantially differ from that of St. James, but the Anaphora of St. James is the longest of them, and its use is canonically mandated for certain occasions, such as the first divine liturgy celebrated by a newly ordained priest, and the first divine liturgy celebrated at a newly consecrated church. Other Anaphorae of note include that of the Twelve Apostles, which is particularly ancient and influenced that of St. John Chrysostom, the Anaphora of St. John Chrysostom, which resembles in many respects his liturgy as celebrated in the Byzantine tradition, and the Anaphora of Mar Bar Salibi, who wrote a famous commentary on the Syriac liturgy; his Anaphora is in many respects a highly condensed version of that of St. James, and is the shortest anaphora in common use in the Syriac Church, and one of the most frequently celebrated.

Very intense language, similar to that of the Byzantine form of the liturgy, is used; the Syriac form shares the emphasis on the descent of the Holy Spirit, with the deacon intoning "How dreadful is this hour, my brethren, when the Holy Spirit takes wing and descends on the altar..." Flagellum are used frequently throughout the consecration; unlike in the Byzantine Rite, these flagellum are fitted with bells, and are used at certain climactic moments throughout the rite of consecration, including the Words of Institution and the Epiclesis.

It is customary in the Syriac Orthodox Church for the laity to receive communion after the general dismissal. Those who are not communicating will exit the sanctuary, receiving the antidoron, while those partaking will approach the now veiled altar, and receive the Eucharist from the priest, while the Metrical Homily of St. Jacob of Sarugh is sung by the deacons behind the curtain ("The Lord Whom the seraphs fear to look at, The same you behold in bread and wine on the altar..."). The laity are communed in both species, by way of intinction, with the wine-soaked bread received on the tongue.