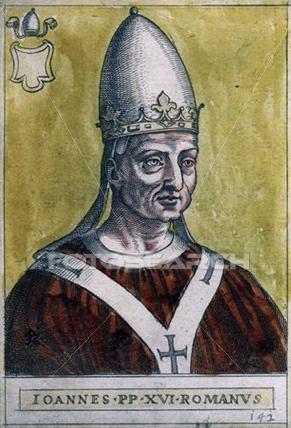 Ioannis Philagathos was born of Greek descent[2][4] and was a native of Rossano, in Calabria, southern Italy,[5][6] then a province of the Byzantine Empire.[note 2]

He was a monk[2] and the chaplain of Theophano, the niece of Byzantine Emperor John I Tzimiskes (969-976), and the Empress consort of Emperor Otto II (973–983). Twice he acted as Imperial chancellor in Italy for Otto II; first from 980–982, whereupon he was appointed Abbot of Nonantola Abbey, and later from 991–992. He was also the Godfather of the Emperor's son, Otto III,[7] and was tutor to the boy when he was seven (987).

In 988 Theophano made John Bishop of Piacenza, in Italy, later raising his see to an Archbishopric.[2] In 995 Otto III sent John to Constantinople as legate for his prospective marriage to a Byzantine princess.

Election of Gregory V by the German Party

In 996 the youthful Emperor Otto III (983–1002) came to the aid of Pope John XV (985–996) to put down a rebellion of the faction led by the rich and powerful Roman nobleman Crescentius the Younger, a leader of the aristocracy of medieval Rome. On the way Otto III stopped to be acclaimed King of Lombardy at Pavia, however failed to reach Rome before the Pope died.

Once in Rome, Otto III engineered the election of his cousin Bruno of Carinthia as Pope Gregory V (996–999), and the new pontiff then crowned Otto III Emperor on May 21, 996. Significantly, Gregory V was the first pope of German blood.[8][9][note 3]

Philip Schaff points out that during the minority of Otho III, the imperialists on the one hand, and the popular Roman party on the other, each contended from their fortified places for the mastery of Rome and the papacy.[8]

Election of John XVI by the Roman Party

The Roman Orthodox party in the West headed by Crescentius, planned however to ally Rome with Byzantium against Otto III, and opposed Otto's choice. Once Otto had returned to Germany, Crescentius led a revolt that usurped Gregory's office.[2] With the active support of the Eastern Emperor, Basil II (976-1025), they offered John Philagathos the papacy, who in turn accepted, over the protests of his friend Abbot St. Nilus of Rossano.[2] He was therefore acclaimed as Pope John XVI (997–998).

At the subsequent Synod of Pavia held by Gregory V and Western bishops at Pentecost in 997, Crescentius was excommunicated, and in July Gregory issued a decree bringing Piacenza once more under the jurisdiction of the Archbishop of Ravenna.[7]

Arrest and Torture of John XVI

Otto III then brought an army to Italy the following year in February 998, and a reign of terror ensued.[2] Crescentius entrenched himself in the Castle of Sant' Angelo, and Pope John XVI fled Rome, however both were captured by the imperial soldiers, and Crescentius was beheaded on April 29.

Pope John was mutilated, having his nose and ears cut off, his tongue cut out, and his fingers broken that he might not write, and was blinded, and publicly degraded in Rome before Otto III and Gregory V.

At the Lenten Synod of 998, held shortly after in Rome, Gregory V formally deposed John, who, at the intercession of St. Nilus, was removed from prison and sent to the Monastery of Fulda, in Germany, where he died in 1001.

Although in office only ten months, John is generally numbered in the series of the popes.[6]

The strengthening of authoritarian tendencies in the German imperial tradition would decisively influence the conflict between emperors and the Western Church in the coming centuries. The history of the papacy from 1048 to 1257 was marked by conflict between popes and the Holy Roman Emperor, most prominently the Investiture Controversy, a dispute over who—pope or emperor—could appoint bishops within the Empire.

Due to the Frankish control of the papacy, the rulings of the Eighth Ecumenical Council of 879 (of which Pope John VIII had participated) were uncanonically rejected in the eleventh century.[note 4] The Filioque was formally introduced into the Church of Rome,[note 5][note 6] as well as the papal claims of world domination (heretical views condemned by the Eighth Ecumenical Council). The new Frankish papacy also began to reject the title of "Ecumenical Patriarch" for the Archbishop of Constantinople (New Rome), an historic title bestowed upon the latter as early as 6th century.[10][note 7]