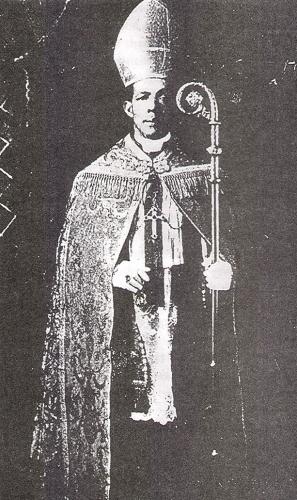 George Alexander McGuire (1866-1934) was a bishop and founder in 1921 of the non-canonical African Orthodox Church,[note 1] which had been envisaged as a home for Blacks of the Protestant Episcopal persuasion who wanted ecclesiastical independence, based on Apostolic tradition. In addition he was Chaplain-General of the Universal Negro Improvement Association (UNIA). 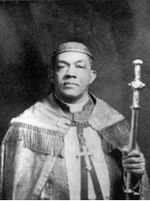 By 1901 McGuire was appointed rector of St. Thomas' Episcopal Church in Philadelphia. Saint Thomas' served the African American elite of Philadelphia and was one of the most prestigious congregations in African American Christianity, having been started in 1794 by Absalom Jones, one of the founders, together with Richard Allen, of the African Methodist Episcopal Church.[1] He is listed as the rector of St. Thomas' in Philadelphia from 1902-05, succeeded as rector there by A.C.V. Cartier (1906-12), the man whom Fr. Raphael Morgan had recommended for Orthodox ordination to the Ecumenical Patriachate.

From 1905 to 1909, McGuire served as Archdeacon for Colored Work in the Diocese of Arkansas, becoming the church's highest ranking African American and the first to achieve the rank of Archdeacon, where he zealously labored to increase the number of missions from one to nine. He also encountered opposition from the local Episcopal bishop who believed blacks should be separated from whites and placed in their own church jurisdiction.

Eventually McGuire resigned and moved to Cambridge Massachusetts where he established St. Bartholomew’s Church for West Indians living in the Boston area. While in Cambridge, McGuire studied at Boston College of Physicians and Surgeons, receiving his M.D. degree in 1910. When his small church was not recognized by the Episcopalian diocese, McGuire resigned in 1911. As he traveled across the U.S. he became even more discouraged by the dismal prospects of blacks in the Episcopal Church and left the denomination.

In 1913 McGuire returned to the West Indies, settling in British-controlled Antigua to care for his sick mother. While there he volunteered at a local parish, serving as a minister in the Church of England, and gained acclaim for practicing medicine on the island. When a strike of local sugar cane workers led to rioting and burning of the sugar cane fields, British colonial officials urged local and religious leaders to oppose the strikes but McGuire refused and urged them to provide the workers with decent, living wages.

McGuire returned to the United States in 1918 and soon afterwards joined the UNIA. Marcus Garvey, the UNIA’s president, appointed him first Chaplain-General of the organization, at its inaugural international convention in New York in August 1920. In this position McGuire wrote two important documents of UNIA, Universal Negro Ritual, and Universal Negro Catechism, the latter containing both religious and historical sections, reflecting his interest in religion and race history.[1]

This was a period of black disillusionment and disenchantment with their status and with the enactment of discriminatory laws. This was not only true in the American South, but also in the Northern cities where the discrimination was often worse. It was also a time when the idea of separate development of the races was being aired. The mainline churches, such as the Episcopal Church (Anglican), wanted to bring the faith to the Blacks, but did not want to be seen as advocates of “political and social equality”.[2]

On September 2 1921, in the Church of the Good Shepherd in New York City, McGuire founded the "African Orthodox Church" (AOC),[note 2] envisaged as a home for blacks of the protestant Episcopal persuasion who wanted ecclesiastical independence. The church, based on traditional Catholic doctrines, was open to all but under complete black leadership and control. McGuire declared to his followers: “You must forget the white gods. Erase the white gods from your hearts. We must go back to the native church, to our own true God.”

The notion of associating with "Orthodoxy" was possibly formed for several reasons. One source of inspiration for the Orthodox Church may have been due to McGuire's association with the Very Reverend Father Raphael Morgan. In addition, "the Orthodox branch of Christianity, divided into Eastern Orthodoxy and Oriental Orthodoxy, was never associated with racism, colonialism or religious imperialism. It was never involved in widespread missionary activity and had limited contacts with Afro-Americans and Africans. Because of its low profile, it was not perceived as racist. The adherents of Eastern Orthodoxy were primarily southern and eastern Europeans, people not associated in the United States with the establishment. The other division, Oriental Orthodoxy, had its membership in what is today referred to as, the Third World - the Middle East, Egypt, Ethiopia and southern India. The name African Orthodox Church denoted its aim: to be a universal Black church in affiliation with a branch of Christianity not known for racism or colonialism."[3][note 3]

Shortly after the UNIA convention in August 1924, McGuire broke with Garvey and focused on expanding his church which mostly attracted Anglican West Indian immigrants, from the High Church Anglican tradition (i.e. Anglo-Catholicism). McGuire would have liked to have seen AOC designated as the official church of UNIA, but Garvey was unwilling to grant such an exclusive priviledge to any denomination. McGuire accordingly resigned from his position at UNIA on the formation of AOC. He then ensured official "orthodox" status for his new church by arranging apostolic succession for himself.[1]

Consecration in the American Catholic Church

Negotitions were immediately initiated with the Russian Orthodox Church in America in order to obtain valid Apostolic Orders. The Russians were hesitant to assist the formation of another "independent" jurisdiction however, making it clear that they were willing to talk, but in the end, they intended to fully control this Black jurisdiction. Such an arrangement was totally unacceptable to Fr. McGuire and the other leaders of this new jurisdiction. Other Orthodox groups in the U.S.A. expressed the same willingness and intent as the Russians, however, the African Orthodox Church finally entered into negotiations with Archbishop Joseph René Vilatte and the "American Catholic Church" (ACC).[note 4]

Fr. McGuire had himself re-ordained Bishop in the American Catholic Church being consecrated on September 28 1921, in Chicago, Illinois, by Archbishop Joseph René Vilatte,[note 5] assisted by bishop Carl A. Nybladh who had been consecrated by Vilatte.[4][note 6]

Meeting with the Ecumenical Patriarch

McGuire's concern with legitimacy was evident in his attempt to secure recognition from the Greek Orthodox Ecumenical Patriarch of Constantinople. In December 1921, three months after his consecration, McGuire, through the intercession of Eastern Orthodox prelates, was granted an audience with Patriarch Meletios while the latter was on a visit to New York City. The Patriarch was interested in the origins and dogma of the AOC. He accepted the Jacobite episcopal source as legitimate but was concerned over its monophysite dogma. To McGuire this must have been a relatively minor matter and he had no difficulty in satisfying the Patriarch. Meletios also was concerned with Western Christian influences in dogma that might have permeated the AOC especially on the question of the nature of the Trinity. (Both Roman Catholicism and Anglicanism adhere to the belief that the Holy Spirit proceeds from both the Father and Son, while Orthodoxy holds procession only from the Father). Here too McGuire appears to have satisfied the Patriarch. Other areas of agreement between Greek Orthodoxy and the AOC included common acceptance of the dogmatic decisions of the seven Ecumenical Councils, the seven Sacraments, the original form of the Nicene Creed, the concept of transubstantiation, the declaration of the Virgin Mary as Mother of God, justification by both faith and good works, and the rejection of predestination. McGuire claimed that the Patriarch accepted the AOC as an Orthodox Church but would not afford it communion with Eastern Orthodoxy until it demonstrated stability and growth.

In 1924 Meletios and his successor, Gregorios VII, requested more information and received copies of the AOC's Divine Liturgy, canons, constitution and Declaration of Faith. Despite the interest shown, the AOC never gained the desired recognition from a major Eastern Orthodox Church. Orthodoxy does recognize different rites, but one of the stumbling blocks may have been the apparent eclectic nature of the AOC's liturgy and services. At its inception, the liturgy was described as a mixture of Roman Catholicism, Anglicanism and Orthodoxy. The chief service was the Mass; minor and major orders were conferred through the Catholic Pontifical; and the official hymnal was the Anglican Hymns Ancient and Modern. The AOC was essentially High Anglican and it was Orthodox only to the extent that its leader had the title of Patriarch, that the original form of the Nicene Creed had been adopted, and that its episcopal source was in an Orthodox Church.[3]

In 1924, the newly organized conclave of AOC unanimously elected McGuire Archbishop of the church. During the remaining decade of his life McGuire built AOC into a thriving international church. Branches were eventually established in Canada, Barbados, Cuba, South Africa, Uganda, Kenya, Miami, Chicago, Harlem, Boston, Cambridge (Massachusetts), and elsewhere. The official organ of AOC, The Negro Churchman, became an effective link for the far-flung organization.[1]

McGuire founded a parish of his denomination in West Palm Beach, Florida in 1925. Two years after that, he consecrated an African clergyman as Metropolitan Archbishop for South Africa and central and southern Africa, Daniel William Alexander. At the same time McGuire was elected Patriarch of the denomination with the title Alexander I. The church then spread to Uganda, as well.

At the time of his death on November 10, 1934, the African Orthodox Church claimed over 30,000 members, fifty clergy and thirty churches located on three continents: North America, South America and Africa.

The movement for ecclesiastical independence started by McGuire in 1921 can be viewed from two perspectives.

First, it was an expression of Black cultural independence in the United States and Africa. It was an effort to promote widespread religious unity under Black leadership. The AOC's inclusion within the apostolic succession was hoped to give it legitimacy in the eyes of both the Black community and the Christian world. This legitimacy, however, did not lead to the growth that McGuire had hoped. Although the AOC increased in size during its first decade, it was primarily through the forceful personality of its leader rather than because of the principle of apostolic succession. After his death the AOC splintered and weakened. In South Africa there was growth, but not at the rate anticipated by Daniel William Alexander, whose most fruitful efforts were the spread of the AOC to Uganda and Kenya, now under the administrative umbrella of the Orthodox Patriarchate of Alexandria.

Second, in its attempt to bring together Blacks of the diaspora and Africa into a common movement, the AOC was a manifestation of Pan-Africanism. Spiritual and emotional needs left unattended in their respective countries, propelled Blacks in the United States and South Africa to affiliate and assert their autonomy in an area where the White establishments saw no threat. Discrimination, racism and second-class citizenship engendered this effort at ecclesiastical independence and racial cooperation on both sides of the Atlantic.[3]