A font, also fount, in the Orthodox Christian context to a basin or container that holds water and is used variously in services of the Church. The term may be applied to a fountain or spring of water that relates to spiritual phenomena.

Fonts as vessels for use with holy water within the Christian communities is of ancient origin as attested to archaeological evidence. These fonts existed in three general forms: stationary fonts at the entrances to churches, portable fonts used in various rites, and private fonts used in houses to keep holy water. Among the earliest were fonts placed in the atria of basilicas that the faithful used for ablutions to wash hands and feet before entering the church.

The use of stationary fonts, consisting of small tubs or basins made of metals or of various types of stone, were found often imbedded in walls of churches and also in larger forms as baptismal fonts usually associated with baptistries. In the form of portable fonts, the font appears in many forms, from small hand held basins to larger movable basins. In modern usage of the term font is more commonly associated with larger portable basins used for baptisms, particularly for infant baptisms, and commonly referred to as 'baptismal fonts'. 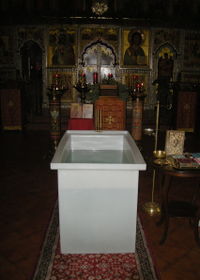 In the Orthodox Church, baptism is always by full triple immersion, even in the case of infant baptism. During the earlier centuries of Christianity when adult baptism was often the norm large baptismal fonts were common, a stationary font was placed in separate rooms or chapels of the church, or even in separate buildings, called baptistries. An example is the late fourth century Baptistry of Neon, also called the Orthodox Baptistry, in Ravenna, Italy. As infant baptisms became common, portable fonts came in use. These baptismal fonts, that tend to be large, are often shaped like a large chalice, and are normally fashioned out of metal. For adult baptisms, larger basins are used, often make-do portable tubs when a baptistry type basin is not available.

In many churches a container, that is a font, may be placed generally in the narthex or near the entrance end of the church in which blessed (holy) water is kept and made readily available for use by the faithful, to partake or take home.

The term font is also often used to refer to springs at which a divine occurrence had happened. An example is the spring at the Monastery of the Life-giving Font in Poros, Greece where Metropolitan Iakovos II of Athens was cured of an illness after he drank from the spring.