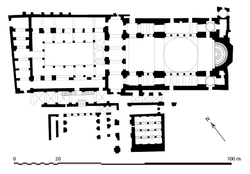 The word atrium is a Latin architectural term that referred to an open courtyard, that is without a roof, in large Roman houses from which are extended the enclosed rooms of the house (‘‘domus’‘). A shallow pool, impluvium in Latin, may be sunken in the floor of the atrium. In modern usage, atrium is used to describe a large open space, often several stories high, in large, mainly office, buildings that provide a feeling of space and light.

When large church buildings began to be constructed after Constantine the Great recognized Christianity, atria (plural for atrium) were often used as an entry way into the church. A large, enclosed area without a roof provided entry to the church building from the west through the narthex into the nave of the church. The atrium may be completely or partially surrounded by porticos. Many examples of atria are found among the archaeological sites of ancient churches in Palestine. In modern usage an atrium is seldom used in church construction.